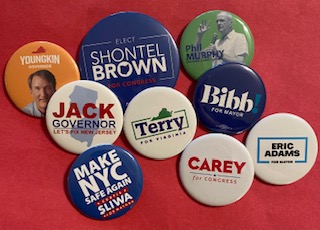 If you’ve picked up a newspaper in the past few weeks, you’ve probably read that this year’s Virginia gubernatorial race is historically significant, and especially so this year, that it will send a signal to the rest of the country about what to expect in the 2022 midterm elections.  If Democrat Terry McAuliffe wins, the message will be that abortion rights matter, that vaccine/mask mandates are popular, that it is an effective strategy linking your opponent with Donald Trump.  And if Republican Glenn Youngkin wins, the message will be that parental control of schools is paramount, that individual rights matter more than government mandates, that Trump is not as toxic as Democrats want you to believe, and that it’s really a referendum on President Biden.  Either way, it will send a message that will resonate in 2022.

There is no question that today’s race for governor is being closely monitored throughout the political world.  It will either give Democrats a sigh of relief, or make them wonder if Biden is going to lead them to the promised land.  It will either rejuvenate Republicans after their defeats of 2020, or have them dismiss it as no big deal.  Either way, with Biden’s job approval numbers falling and the Democrats’ inability (so far) to get much of their agenda passed, the Republicans could be on the verge of having a big year in ’22, regardless of what happens Tuesday.  Even with a McAuliffe win — and certainly if a Youngkin victory — Democrats could be in for some rough sledding next year.  Remember, following McAuliffe’s first win for governor, in 2013, Republicans followed a year later with a big win in the midterm elections, capturing the Senate and retaining the House.  So much for bellwethers.

We can interpret tonight’s results some other time.  Here’s what’s at stake on Election Day 2021:

New Jersey — Gov. Phil Murphy (D) is a strong favorite over GOP challenger Jack Ciattarelli, a former three-term assemblyman, despite Biden’s decline in the polls.  Murphy, whose lead is in the low double digits, would be the first Democratic governor re-elected since Brendan Byrne in 1977.  Trump is not a major factor in this state which, while reliably blue in presidential contests, has elected its share of Republican governors.  Both houses of the state legislature are up as well; Democrats have a 25-15 majority in the Senate, 52-28 in the Assembly.

Virginia — Biden won the state by ten points last year, but his numbers are underwater.  So it’s unclear what strategy will turn out to be more effective: McAuliffe painting Youngkin as a Trump clone, or the Republican linking the Dem to what he portrays as a floundering president.  Since 1977, a Republican has always won the governorship when there’s a Democrat in the White House except for 2013, when Barack Obama was president and McAuliffe was first elected governor.  Polls show a dead heat.  There’s also elections for all 100 members of the lower house, the General Assembly, of which the Democrats captured a majority in 2019, their first in 20 years.  The current breakdown is 55 D, 45 R.

Florida 20 — Primaries for the seat left vacant by the death of Rep. Alcee Hastings on April 6th.   The special election will be held on Jan. 11, 2022.  The seat is overwhelmingly Democratic.

Ohio 11 — This solidly Democratic seat, which was held by Marcia Fudge (D) until she left to become Secretary of Housing and Urban Development, was essentially settled in the special Dem primary on Aug. 3rd.  That’s when Shontel Brown, backed by Hillary Clinton, the Congressional Black Caucus PAC and the party establishment, defeated Nina Turner, supported by Bernie Sanders, AOC, and other progressives.  The GOP nominee is Laverne Gore.

Ohio 15 — The special election to fill the seat vacated by Steve Stivers (R), who resigned to become president and CEO of the Ohio Chamber of Commerce, pits Republican Mike Carey against Democratic state Rep. Allison Russo.  Carey, a coal lobbyist, got a huge boost during the GOP primary campaign when he was endorsed by Trump.  Stivers had held the seat since he defeated one-term Dem incumbent Mary Jo Kilroy in 2010.  Trump carried the district by 14 point in 2020.

Atlanta — Incumbent Keisha Lance Bottoms, first elected four years ago and who was reportedly on Biden’s short list of VP candidates, stunned the city with her May 6 retirement announcement.  Sixteen candidates are on the ballot, including former two-term Mayor Kasim Reed, who preceded Bottoms.  If no candidate receives 50% of the vote, the top two finishers advance to a Nov. 30 runoff.  The top issue in the race is the rising crime rate, which is thought to have contributed to Bottoms’ retirement

Boston — Never in its history has Boston elected anyone other than a white man as mayor.  But once Mayor Marty Walsh left early this year to become Secretary of Labor, the leading candidates to replace him were not only women, but women of color.  Kim Janey, who is African American and who became acting mayor upon Walsh’s departure, didn’t survive the September primary.  The two who did are at-large city councilmembers Michelle Wu, who finished first and whose parents are from Taiwan, and Annissa Essaibi George, the runner up whose parents are Polish and Tunisian.  Essaibi George is considered close to Walsh and is the more “moderate” of the two finalists; Wu, seen as more progressive, is backed by Sen. Elizabeth Warren, among others, and is thought to hold a large lead.

Buffalo — Mayor Byron Brown was beaten in the June Democratic primary by India Walton, a democratic socialist.  First elected in 2005, Brown is the city’s first African-American and longest serving mayor in history.  And he’s running as a write-in candidate to keep his job, calling Walton too risky to take a chance on.  If elected, Walton, the only name on the ballot, would be the city’s first woman, and first black woman, to win the mayoralty.  She has been endorsed by New York Sens. Chuck Schumer and Kirsten Gillibrand but, notably, not by new Gov. Kathy Hochul, a Buffalo native who has remained neutral.

Cleveland — Mayor Frank Jackson is retiring after four terms, the longest serving mayor in city history.  Two Democrats have advanced to the general election in this officially nonpartisan race, Justin Bibb, a newcomer, and Kevin Kelley, a city councilmember since 2005.

Detroit — Mike Duggan is seeking a third term and is being challenged by Anthony Adams, two Democrats in an officially nonpartisan contest.  Duggan’s initial election in 2013 made him the city’s first white mayor since the election of 1969.

Minneapolis — Seventeen candidates, including incumbent Jacob Frey (D), are on the ballot in a ranked-choice election.  Frey has been under siege since the May 25, 2020 murder-by-police of George Floyd and for the dramatic rising crime rate since that day.

New York — Mayor Bill de Blasio (D) is ineligible to seek a third term.  Brooklyn Borough President Eric Adams is an overwhelming favorite to succeed him in his race against GOP nominee Curtis Sliwa, a longtime head of a vigilante anti-crime group who won attention by patrolling the subways for decades.  The city is 7-1 Democratic.  Adams, who has been running as a tough-on-crime centrist, would be the city’s second black mayor (David Dinkins, 1989).

Seattle — Mayor Jenny Durkan is not seeking re-election.  The two candidates who advanced to the general are Lorena Gonzalez, the city council president, and Bruce Harrell, her predecessor.

St. Louis — Lyda Krewson, the city’s first female mayor, is not seeking re-election and announced her resignation in April.  The two candidates in the race, which for the first time has officially been declared nonpartisan, are Tishaura Jones, who is black and female and who became mayor upon Krewson’s resignation, and Alderwoman Cara Spencer.