Bernie Sanders’ decision to endorse Joe Biden on April 13th came sooner than many expected, considering that he said less than a week ago he was still hoping to win more delegates and that four years ago he didn’t endorse Hillary Clinton until July 12th — well after Clinton became the presumptive nominee. 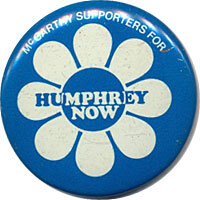 Of course, no one in recent history topped what Eugene McCarthy did in 1968:  He didn’t endorse Hubert Humphrey until October 29th of that year, just a week before the election.  Then again, I still don’t know if Jerry Brown ever endorsed Bill Clinton in 1992.  And neither Nelson Rockefeller nor William Scranton endorsed Barry Goldwater in 1964.

Here’s a look at some memorable battles for the nomination and when the runner-up endorsed the winner:

2 thoughts on “When The Runner-Up Endorsed The Presumptive Nominee”