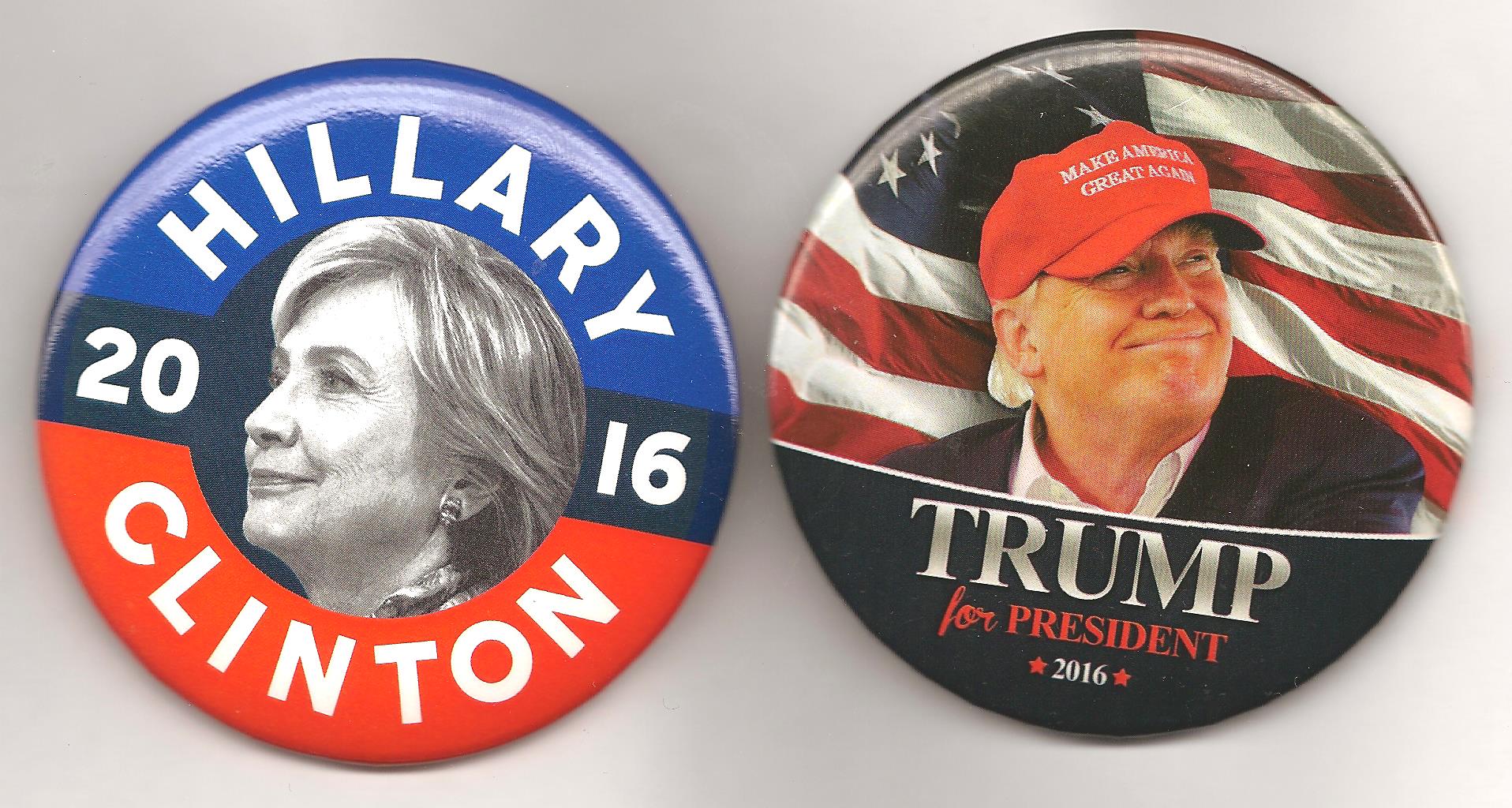 With perhaps few exceptions throughout history to point to, this has been the ugliest, slimiest, pettiest, most revolting and depressing presidential election in memory.

It’s also been the most fascinating.  Here’s what we got.

Breaking one glass ceiling after another, it was not much of a surprise that Hillary Clinton became the Democratic nominee this year.  A razor-thin loser to Barack Obama in 2008, she was always expected to seek a second chance after his eight years were up.  And while the challenge from Bernie Sanders proved far thornier than anyone anticipated, she rode her victories in the primaries all the way to the top at the convention in Philadelphia.  The party, for the most part, is united behind her.

Contrast that with the GOP, which has never been known for nominating unlikely candidates.  (Sure, Eisenhower in ’52, but he was the Supreme Allied Commander, back when the U.S. was winning wars.  And before that, Wendell Willkie in 1940.  But we digress.)  Donald Trump went from being a reality TV celebrity (with conventional wisdom declaring he had absolutely no chance of winning) to someone who sold himself as a business success of the first order and who was not afraid to say what he thought.  And while not everyone liked what he had to say, it touched a chord among Republican voters — who were tired of politics as usual, tired of jobs being shipped overseas, tired of what they saw as a timid Obama foreign policy and a porous border with Mexico, and tired of their own leaders in Congress.  Trump outlasted 15 rivals for the nomination.

A lot has happened since.  Between questions about Clinton’s foundation, health, email server, votes on war, FBI investigation and ties to Wall Street, and questions about Trump’s taxes, temperament, ties to white nationalists, Birther claims, business and hiring practices, and comments about women, Hispanics, veterans and the disabled, the nation limps into the election with two candidates possessing the highest unfavorables ever known to modern polling.  That was not intended for the purpose of launching into an argument about who is “worse.”  But when you think of when voters go to elect a new president — think Barack Obama in 2008, Ronald Reagan in 1980 or John F. Kennedy in 1960 — it was often about hope.  Or promise.  Voting FOR someone.  That still may be the case with some voters this year.  But for many, this election can’t come soon enough.  The stench has been dreadful.

Electoral votes.  Of course, this is not a national election; the one with the most popular votes doesn’t necessarily win, as Al Gore learned in 2000.  This is a 50 state (plus D.C.) election where each state has electoral votes based on population, and the winner of the election is the candidate who reaches the magic number of 270.  So yes, every vote counts.  But it really counts if you are in one of those — you guessed it — “battleground states.”  We “know” (or at least the polls tell us) that most of the states are already “decided” … states like California and New York and Indiana and Tennessee.  What we don’t know (or at least with any certainty) is how the following states will vote.  Here’s how they look at the campaign’s finish:

Florida (29 electoral votes).  Polls have it tight.  Large Hispanic turnout could aid Clinton, while Trump is hoping for sizable white vote.  Went twice for Obama; 2012 vote was closest in the nation.

Pennsylvania (20):  Clinton has had a steady though narrow lead but Dems are nervous and have sent heavy artillery into the Keystone State for her.  Trump and Republicans think they have a shot here and have been focusing on it as well.  GOP hasn’t carried PA since 1988.

Ohio (18):  Trump is expected to carry the Buckeye State which, as we will be reminded all night, no Republican has ever been elected without.  Obama won it twice, as did George W. Bush and Bill Clinton.  Whether it remains its bellwether status after 2016 is up for debate, but the state does pick winners.  The last to win Ohio and not win the White House: Nixon, 1960.  Trump also leads in Iowa (6), which also went for Obama each time.

Georgia (16):  Could this state really be in doubt?  Indications of increased African-American and Hispanic voting strength make this a Clinton target, but we’re probably still a ways to go before this state goes Democratic again.  Last times:  1992, 1980.  Best guess is that it’s narrower than Republicans would like.

Michigan (16):  As Romney did in 2012, Trump is looking at the Wolverine State as a possible pickup; Romney failed and the guess is that Trump does too.  But both sides are fretting about the state in the waning days, and that is a surprise.  Trump needs at least Michigan or Pennsylvania if he is to have a chance at being elected.

Other states considered close, with electoral votes and and how they went in 2012:  Arizona (11 Romney), Colorado (9 Obama), Nevada (6 Obama) and New Hampshire (4 Obama).  Perennial battleground states like Virginia (13 Obama) and Wisconsin (10 Obama) are thought to be in Clinton’s corner this year.

Third Parties.  Given the disdain many have for the two major party presidential candidates, there was plenty of talk about a significant turnout for Gary Johnson (Libertarian Party) and Jill Stein (Green Party) this year.  But, as usual, with neither making it to the presidential debates, these candidates have faded from view.  Still, Johnson, who has been polling in the 3-6% range, is all but certain to break the Libertarian record of 1.275 million votes (0.99%) — held by Johnson, four years ago.  The real question:  whether either candidate pulls a Nader — getting enough votes in a particular state to hurt a major candidate’s chances.

Senate.  The Republican majority of 54-46 is in serious jeopardy.  Of the 34 seats up on Tuesday, 24 are held by the Republicans.  Democrats, who are defending just ten seats, need a net gain of four, if Clinton is elected, to win a majority, five if Trump wins.   The Dems are thought to have only one seat in jeopardy:  in Nevada, where Harry Reid is retiring.  Republicans, on the other hand, have their hands full in trying to keep XX states from flipping:  Illinois, where Mark Kirk is trailing in his bid for a second term; Wisconsin, where Ron Johnson is facing the Democrat he unseated six years ago, Russ Feingold; Pennsylvania, where Pat Toomey is neck and neck with Democratic challenger Katie McGinty, and in New Hampshire, where Kelly Ayotte finds herself in a tossup with Dem Gov. Maggie Hassan.  Democrats are also hoping a comebacking Evan Bayh will win the Indiana seat being vacated by GOP incumbent Dan Coats.  Two more seats that weren’t on anyone’s radar screen a few months ago — North Carolina, where Richard Burr let his Democratic challenger sneak up on him, and Missouri, where Roy Blunt is in the race of his life — are now too close to call.   Also on the watch list:  Florida, where failed presidential candidate Marco Rubio (R) changed his mind and is thought to be ahead in his bid for a second term; and Arizona, where John McCain (R) was once thought to be battling for his political survival but no longer.

Women in the Senate.  The number is now at a record 20 but it’s likely to increase.  There will be no change in California, where Barbara Boxer (D) is retiring and where either Kamala Harris or Rep. Loretta Sanchez — two Democrats — will succeed her.  It will also be a wash in New Hampshire, where Sen. Kelly Ayotte (R) is being challenged by Gov. Maggie Hassan (D).  It will be a net loss for women in Maryland, where Rep. Chris Van Hollen is the overwhelming favorite to succeed the retiring Barbara Mikulski, a fellow Democrat.  But women have good or decent shots in the following states:  Nevada (Catherine Cortez Masto), North Carolina (Deborah Ross), Illinois (Tammy Duckworth) and Pennsylvania (Katie McGinty).  The two female incumbents seeking re-election this year, Alaska’s Lisa Murkowski (R) and Washington’s Patty Murray (D), expect no trouble on Tuesday.

House.  Democrats need a net gain of 30 seats to put Nancy Pelosi back in the speakership, which most observers see as unlikely.  The last times either party picked up 30 seats or more in a presidential election year were 1980, with the Reagan landslide, and 1964, with the LBJ wipeout.  But the Dems are almost certain to add to their total on Tuesday; the list of most vulnerable GOP incumbents includes Frank Guinta (NH), Cresent Hardy (NV), David Jolly & John Mica (FL), Bob Dold (IL), Will Hurd (TX), Bruce Poliquin (ME), Scott Garrett (NJ) and Rod Blum (IA).  Perhaps the most vulnerable Democratic incumbent is Brad Ashford (NE).

7 p.m.: Both Indiana and Virginia have a claim on this year’s running mates, one reason why neither state’s presidential contest is considered close.  Watch Georgia to see if demographic changes are already underway.  Democrats were once confident about picking up the Senate seat in Indiana with a comebacking Evan Bayh.  He still leads but the margin has narrowed.  It will be the earliest hint about which party takes control.

7:30 p.m.: All eyes are on North Carolina, which has an election night trifecta: tight contests for president, governor and the Senate.  Trump is thought to be ahead in Ohio, which has gone with the national winner the last 13 times.  A Senate race in Ohio once considered competitive is no longer thought to be the case.

8 p.m.: Key states are Florida and Pennsylvania, with New Hampshire thrown in as well.  It’s hard to see a path to the presidency for Trump if he fails to win the Sunshine State or the Keystone State; he may need both.  Could Michigan really be in play?  Missouri, New Hampshire and Pennsylvania have the closest Senate contests.  GOP Senate incumbent is ahead in Florida but trails in Illinois.  Note that while most of Florida and New Hampshire vote by 7 pm, there are still a few polling places in the states open until 8 pm.  Hopefully the networks will hold off from calling the states before 8.

9 p.m.: Colorado is the key presidential state.  We’ll see if Trump can make a move in Wisconsin.  And while the GOP is likely to win Texas, as usual, we should watch to see if the margin is close (Hispanics? Cruz loyalists?).

10 p.m.: Iowa and Nevada are the last presidential swing states to watch. Big Senate race in Nevada, the GOP’s only shot at a pickup.

11 p.m.: After California polls close, we should get a better picture about the battle for the House.