With three female senators already in — Elizabeth Warren, Kirsten Gillibrand and Kamala Harris — and with the possibility of another, Amy Klobuchar — the question is … Who was the first female senator to launch a presidential bid? 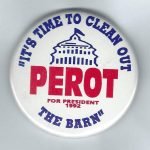 Last week’s trivia question was:  Who was the first person to announce a serious presidential candidacy on a TV program?