The passing of former President George Bush, at age 94, has been met with what I think has been a pretty balanced, mostly favorable assessment of his long career.  To be sure, he was hardly without faults, and he made decisions and took actions that were deeply regrettable.  The Bush campaign’s racist dog whistle of the Willie Horton saga, for example, has been cited as the precursor for some of the ugliness we have today in politics.  Without excusing the tone of the 1988 campaign, I think that, for the most part — from his call for a “kinder and gentler” America and his fight for the Americans with Disabilities Act and improvements in the Clean Air Act, to his magnanimous concession following his 1992 defeat and his actions since, we have seen for the most part the essential Bush: a belief in civility, dignity and decency.

If his political life was filled with pluses and minuses, the same can be said about the campaign buttons used to sum up his career.  What follows is hardly a complete collection.  It’s more a combination of some of my personal favorites, as well as those that help define the 41st President … good and bad.

He first ran for the Senate in 1964, against Texas Democratic incumbent Ralph Yarborough.  No Texas Republican was going to win in a year Lyndon Johnson was atop the Dem ticket.  Bush ran as a Goldwater conservative and, true to form, he made it clear he opposed the Civil Rights Act that year.  He lost big.  Bush ran again in 1970, in a different political climate, expecting to face and expecting to beat the liberal Yarborough.  But Ralph was upset in the Democratic primary by moderate conservative Lloyd Bentsen.  That changed the dynamic completely, upended Bush’s campaign strategy, and he lost once again.  Sandwiched between the two Senate losses were two terms in the House from a district in the Houston area.

A series of governmental and party positions — UN Ambassador, RNC chair, liaison to China, CIA director — led him to seek the Republican presidential nomination in 1980.  He organized early and managed to win the Iowa caucuses — but not much more, as Ronald Reagan, the frontrunner from the outset, could not be stopped. 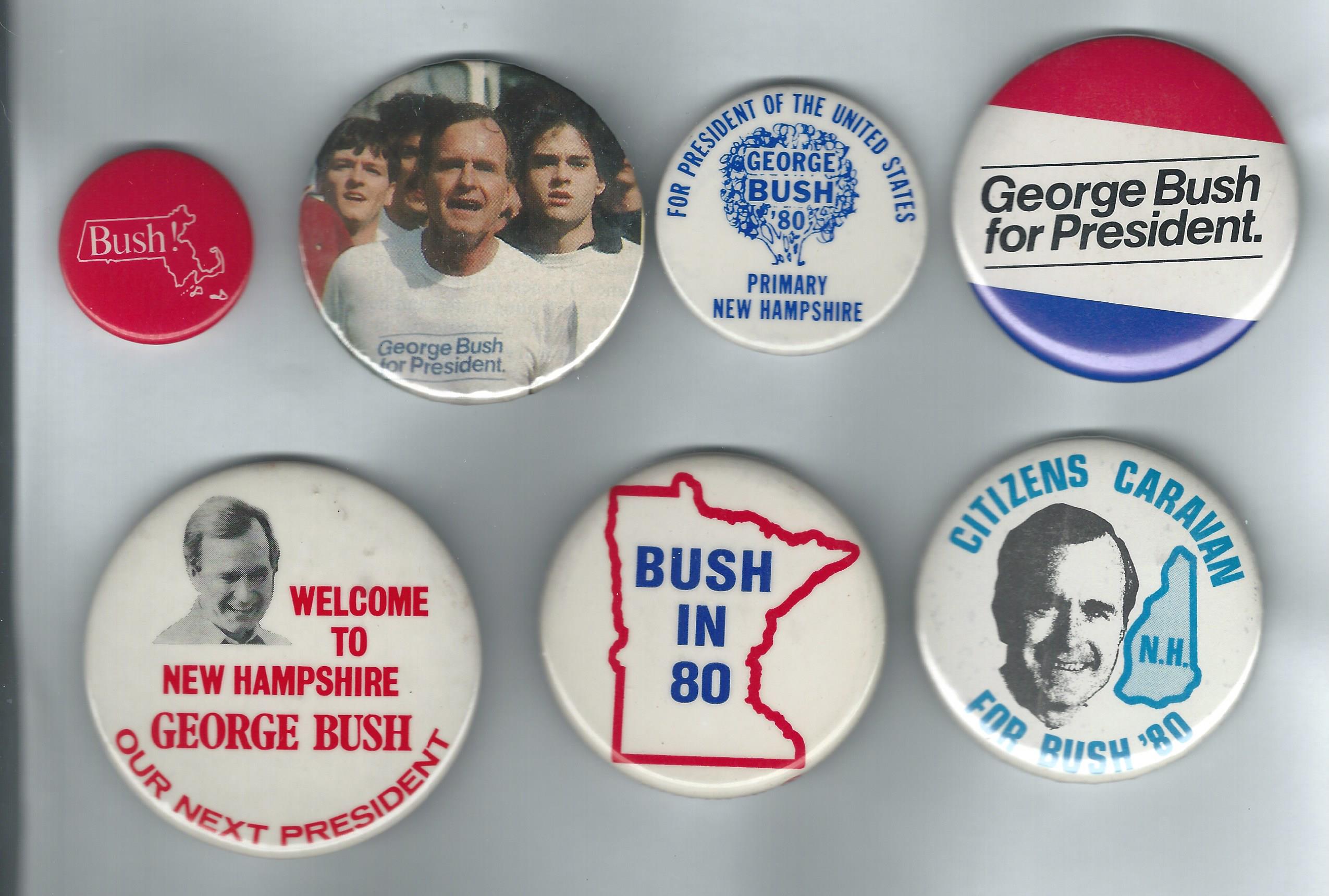 But when it came time for Reagan to pick a running mate, Bush seemed to make the most sense.  He had Washington and foreign policy credentials, a moderate reputation, and had shown voter appeal.  (And how about that clever slogan in the button on the right???) 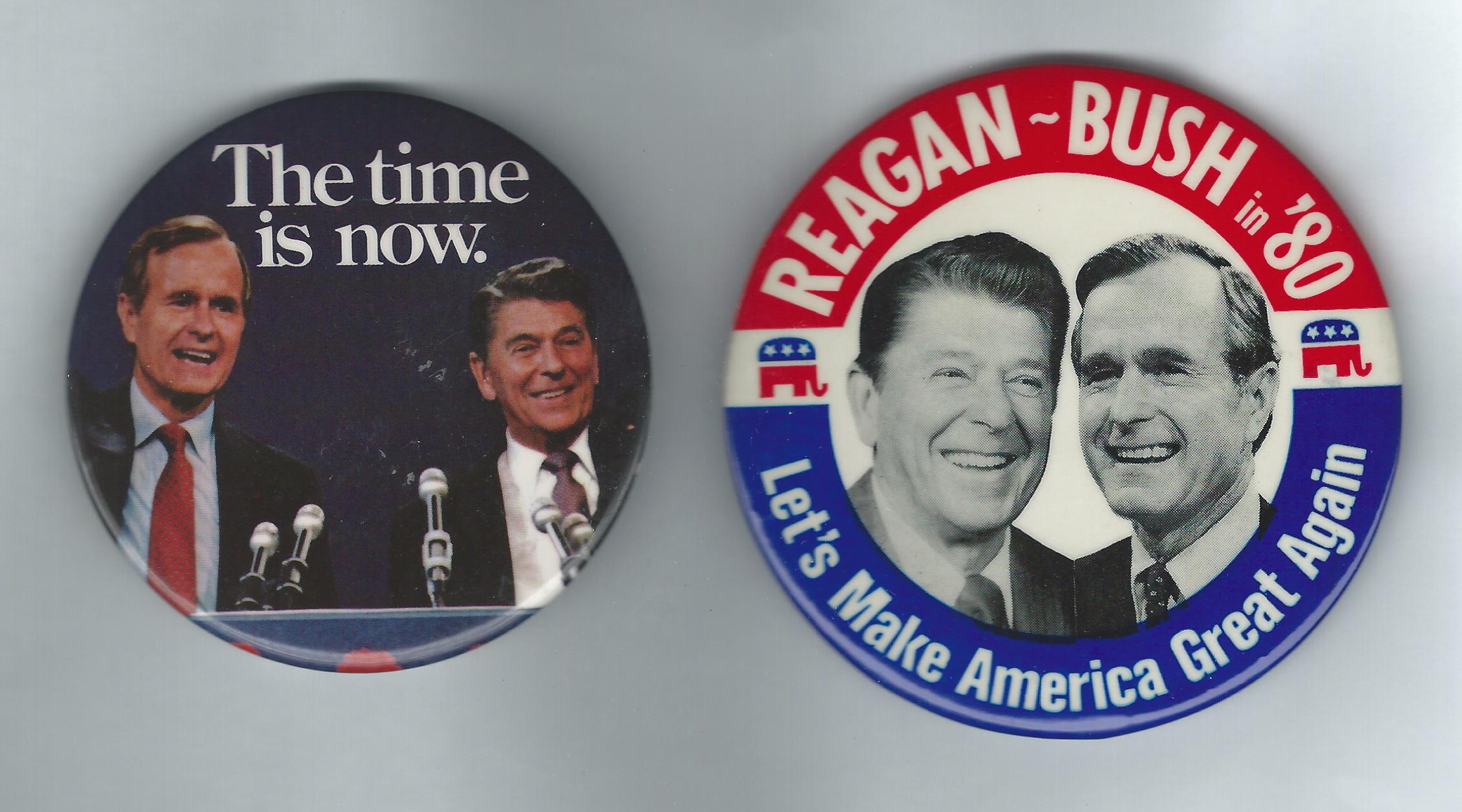 After two terms as the loyal vice president, Bush was the favorite for the 1988 presidential nomination.  He did suffer an embarrassing third-place finish in the Iowa caucuses, but rebounded strongly in New Hampshire and went on to capture the nomination quite easily at the convention in New Orleans. 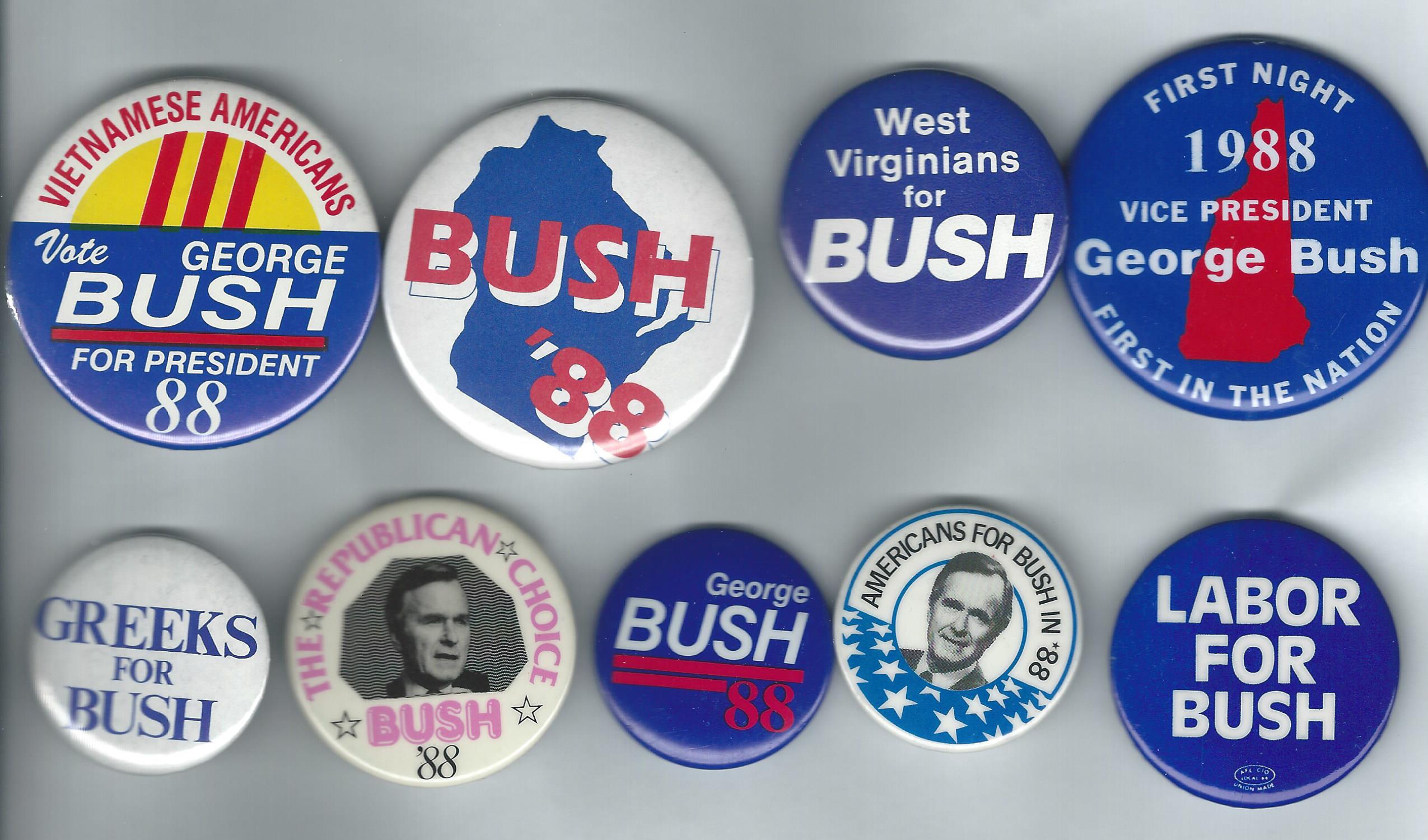 Before that, however, he needed to pick a running mate.  There were many possible choices. 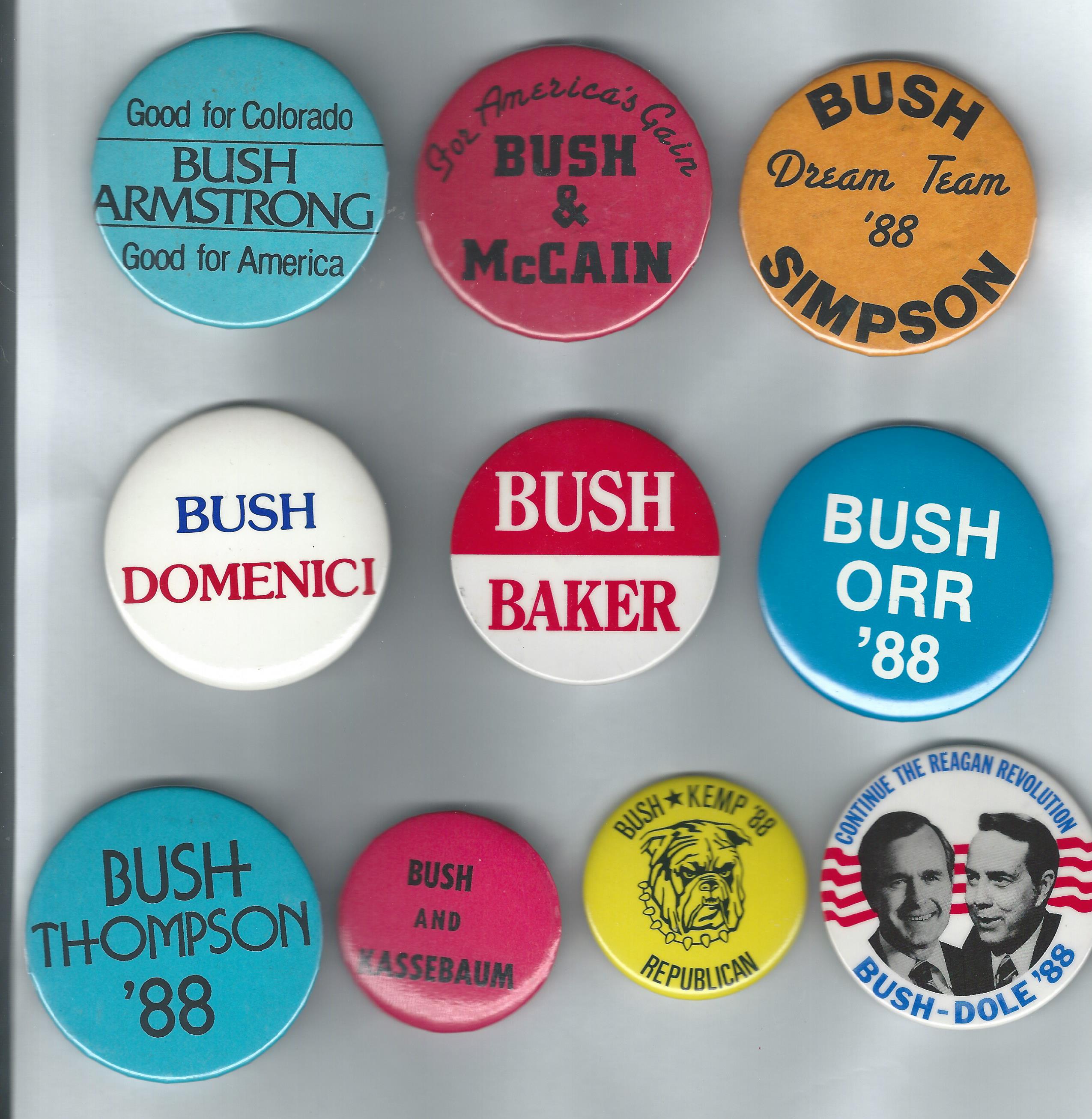 Ultimately, he selected Dan Quayle — the two-term senator from Indiana.

A month before the GOP convention, Democrats met in Atlanta and nominated Massachusetts Gov. Michael Dukakis.  One of the more popular refrains at that convention was Ted Kennedy mocking Bush for being “missing in action” throughout all the key moments of the Reagan administration.  “Where was George?” serenaded Kennedy, and the delegates in Atlanta joined in.  Perhaps Kennedy was not the right person to lead that chant, at least as Republicans were concerned.  They responded to the “Where was George” taunt by reminding their delegates about Kennedy’s role at Chappaquiddick.  As many buttons showed.

The Bush-Dukakis general election was nasty.  Bush was roundly criticized for his attack of Dukakis’ furlough program, in which a convicted murderer, Willie Horton, while on a weekend furlough, raping a woman and assaulting her boyfriend.  A so-called independent expenditure campaign ran commercials attacking Dukakis that featured pictures of Horton, who is black, a tactic opponents saw as racist.  The Bush campaign also questioned the patriotism of Dukakis.  Many of the Bush tactics used during the general election seemed to belie the vice president’s convention vow of a “kinder, gentler” approach.  Here’s a sampling of some anti-Dukakis buttons. 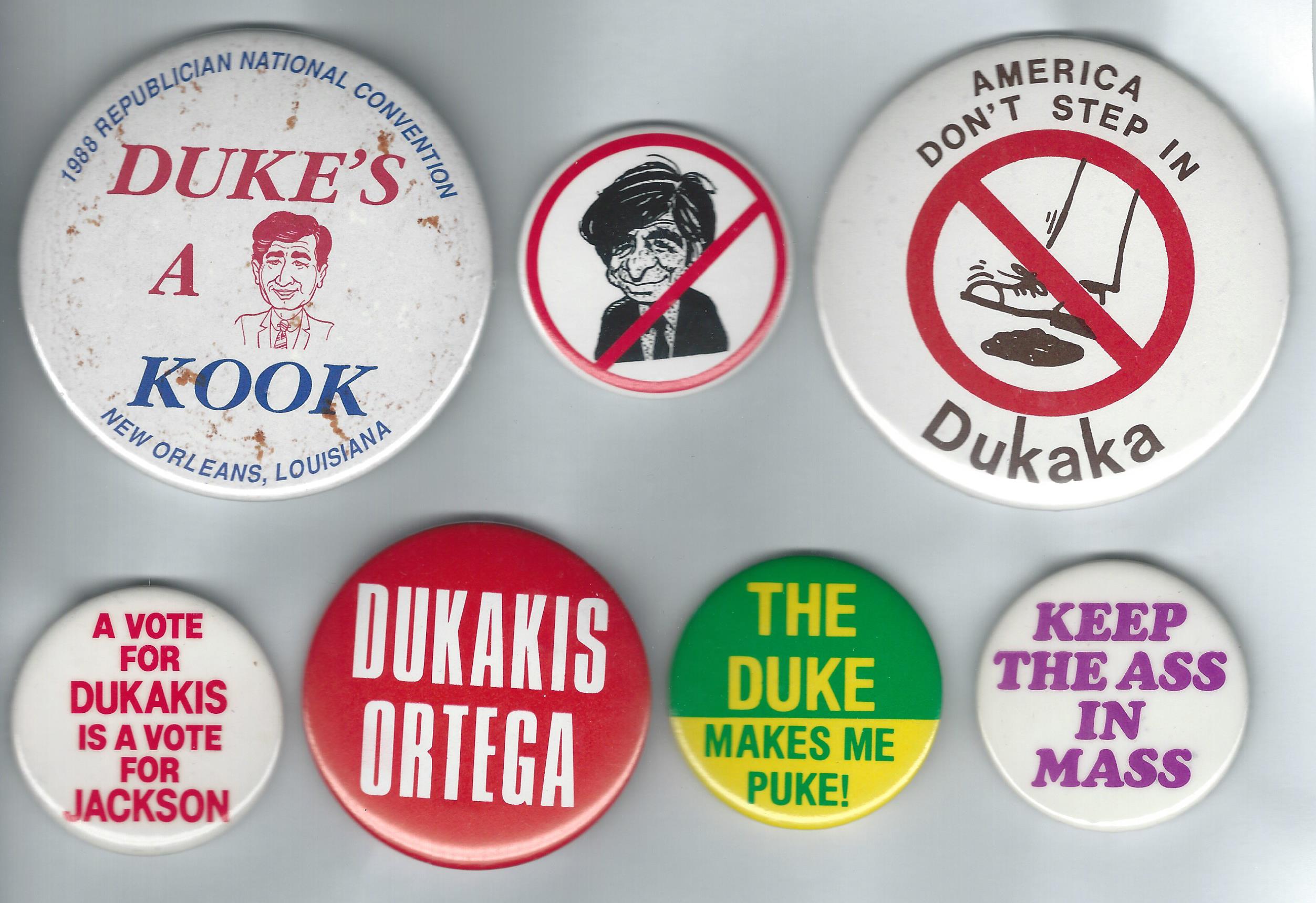 Of course, there was no shortage of anti-Bush buttons either. 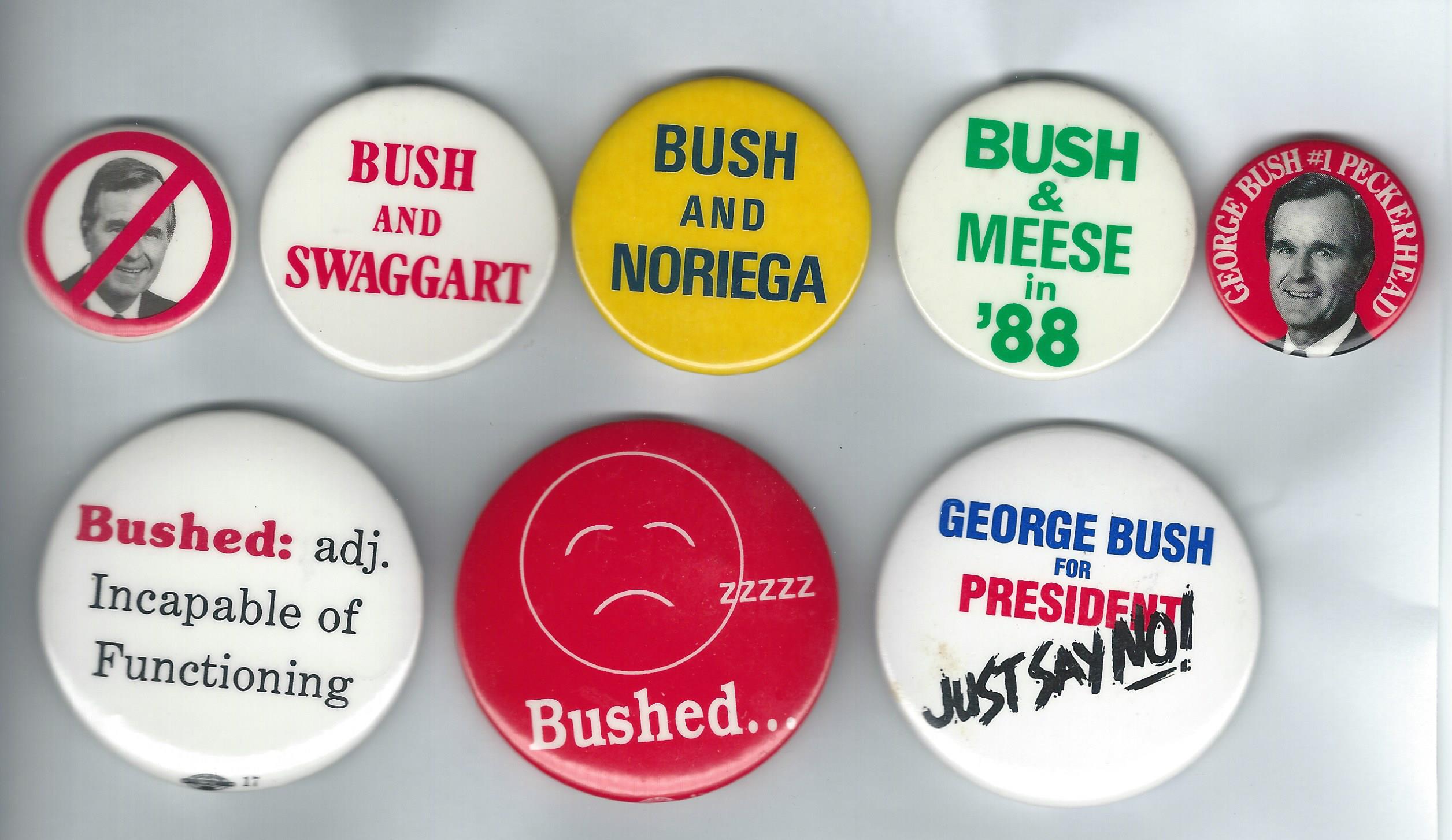 In the end, the election wasn’t close:  The Bush-Quayle ticket won 40 of the 50 states.  The raw partisanship Bush exhibited as a candidate seemed to fade once he was in the White House.  He reached out to Democrats and was eager to compromise.  During his tenure, Bush witnessed the collapse of the Soviet Union and the fall of the Berlin Wall.  He led an international coalition to push Saddam Hussein out of Kuwait.  With his leadership during the Gulf War, which ended quickly and which resulted in limited casualties, Bush found himself with a job approval rating of 89% — an all-time record.  He pushed the Americans with Disabilities Act through Congress, a significant civil rights bill, and he worked to strengthen the Clean Air Act.  He helped resolve the savings & loan industry mess, and his reversal of his “no new taxes” pledge, while anathema to conservatives, helped bring the deficit under control.  He was ready for a second term. 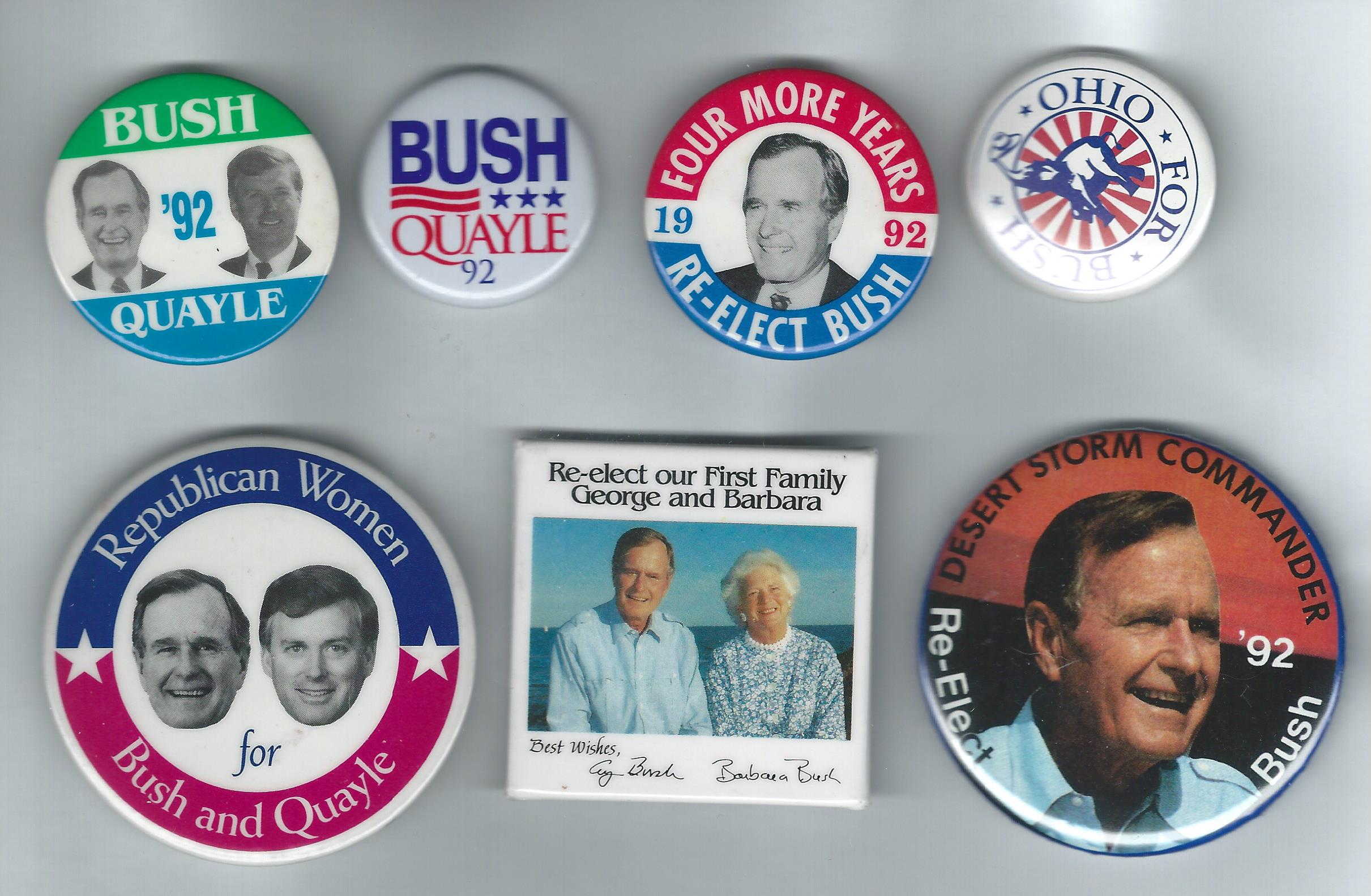 But that’s not what the voters wanted.  For all he accomplished, he never got a handle on the faltering economy.  Nor did he seem to empathize with the growing number of Americans who were losing their jobs, their savings, their quality of life … while Bill Clinton, the Democratic nominee — warts and all — seemed to “feel their pain.”  Bush’s 89% job approval had plummeted to 29% by August of 1992.  The unemployment rate, which had reached 7-1/2 percent, added George Bush to the list.  Below, some anti-Bush buttons from his second term. 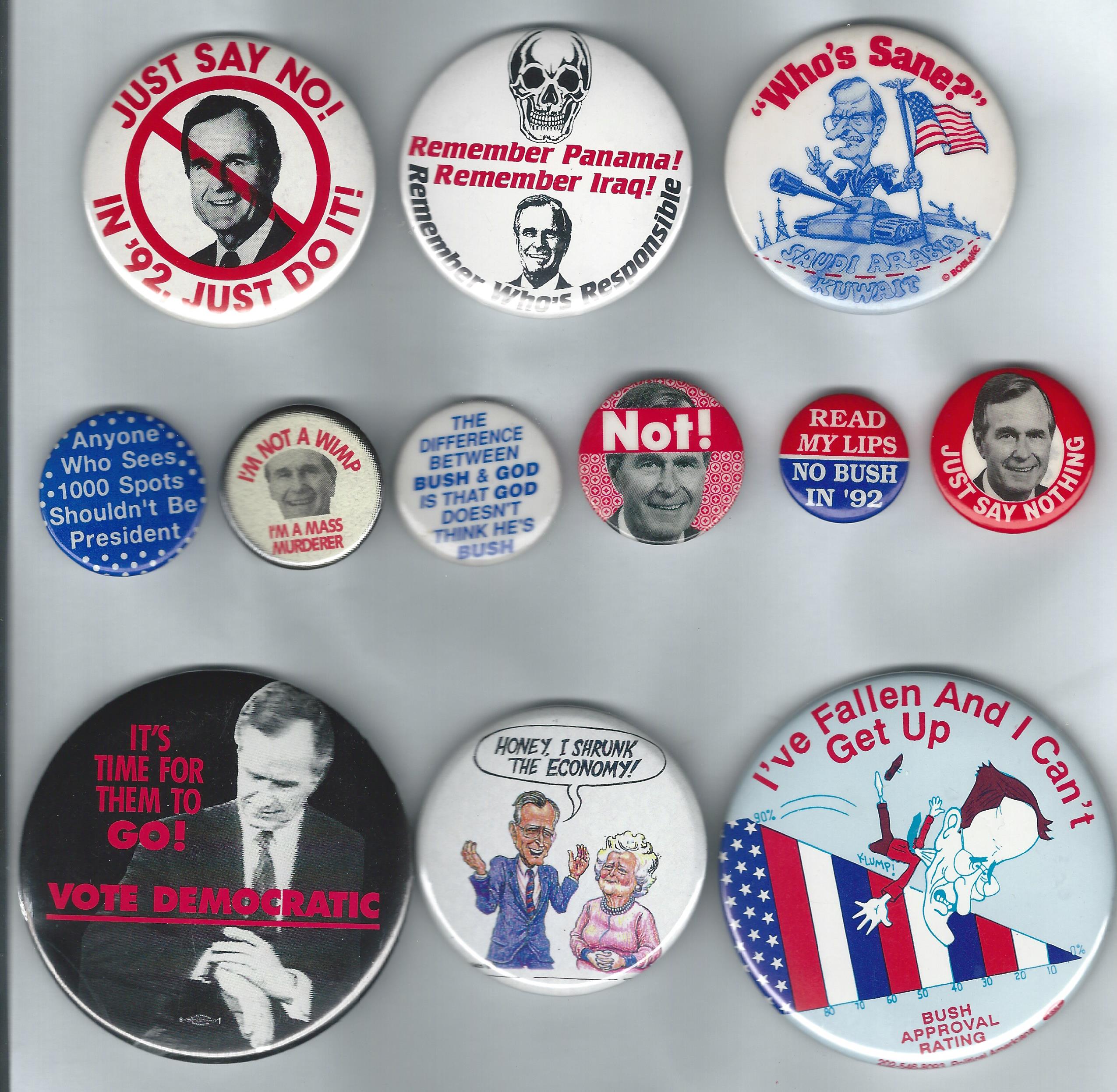 5 thoughts on “The Career of George H.W. Bush — In Buttons”