Malcolm Wilson, who became governor of New York in 1973 following the resignation of Nelson Rockefeller, was hoping to win a full term on his own in 1974. A Republican, Wilson was also running on the Conservative Party line (Row “C”).  Despite the photo, this button is black on bright orange. 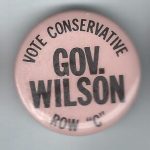