The Senate campaign news of the week was the retirement announcement by Barbara Boxer, the 74-year old California Democrat who said she would not seek a fifth term next year.  Usually, when a Senate incumbent steps down, it’s good news for the opposite party.  But there hasn’t been good news for the Republicans in the Golden State in quite some time, and that is expected to continue; in fact, given California’s unique voting system, the betting is that the GOP doesn’t even make it to the November 2016 general election runoff.

But if the political terrain doesn’t appear especially rosy for the Republicans in California, it’s not looking much better nationally for them either in next year’s Senate races.  Of the 34 seats up, 24 of them are currently held by the GOP.  As dispiriting as that sounds, it’s even worse for them if you look at who’s up in 2016:  very few Democratic targets, far more vulnerable Republicans.  Of course, that makes sense: this is the Senate Class of 2010 we’re talking about here, those elected in the Tea Party surge in 2010.

The fact is, there are — at this admittedly early date — only two Democratic seats worth watching in 2016.  One of them is in Nevada, where Harry Reid, the majority-turned-minority leader, may or may not seek a sixth term.  Back in 2010, Reid was thought to be a goner, but the Republicans bailed him out by nominating Sharron Angle, a Tea Party favorite who failed to connect with most voters.  This time, it’s very likely the GOP may put up Gov. Brian Sandoval, who won an astounding 71% of the vote last year en route to a second term.  If there is any question that Sandoval is looking at next year’s Senate race, it was dispelled when he went all out to ensure that Mark Hutchison (R) was elected lieutenant governor.  The message was clear: if Sandoval would leave in 2016 for a Senate bid, he would first make sure that a Republican would succeed him as governor.  For his part, Reid put his entire machine behind the Democratic candidate for LG, Lucy Flores.  But she lost badly to Hutchison, 60-34%.

There are reports that indicate Sandoval is unsure about running for the Senate in 2016, but the guess here is that he does.  And if Reid stays in the race, the guess is that Reid loses.  But not everyone is convinced Reid runs.

The only other potentially vulnerable Democrat on the list of incumbents up next year is Michael Bennet of Colorado.  He also was thought to be an underdog in 2010 but was saved by a Tea Party candidate who made substantial mistakes during the campaign.  That 2010 candidate, Ken Buck, was elected to Congress last year and may want a rematch in 2016.  But it’s a different electorate in a presidential year, and Bennet has to go into the race as a favorite.

It’s a different story for the Republican seats.  There are quite a few incumbents who may face tough re-election challenges next year.

Let’s start with Ron Johnson in Wisconsin.  He won an upset victory in 2010, knocking off incumbent Democrat Russ Feingold in a very good Republican year.  But according to most reports, Feingold is ready for a rematch.  Johnson, meanwhile, has not moderated his very conservative views, and it’s debatable whether that’s a smart strategy for 2016.

Pat Toomey, elected in Pennsylvania on his second try, is also a strong conservative running in a relatively blue state.  But unlike Ron Johnson, he has seemingly moved somewhat to the center on some issues, risking the wrath of the NRA with his support for expanded background checks.  Former Rep. Joe Sestak, who knocked off Republican-turned-Democratic incumbent Arlen Specter to win the Democratic nomination in 2010, is looking for a rematch with Toomey.

Then there’s Mark Kirk of Illinois.  There are lingering health questions from the stroke he suffered in January of 2012, though he seems to have recovered remarkably well.  He also has positioned himself very nicely on many issues in his very blue state, and while that is fine for November, he could face Tea Party opposition in the March primary.  Either way, there is no shortage of Democrats willing to run.  It’s definitely one to watch.  And there’s likely to be Tea Party challenges to GOP Sens. John McCain (Ariz.) and Rob Portman (Ohio) as well, though their renomination/re-election chances appear secure.  And did we mention the decisions currently being weighed by Marco Rubio in Florida and Rand Paul in Kentucky?  Both are looking at the White House, and their respective state laws bar them from running for both offices (though theoretically they can test the White House waters early and then switch back to Senate re-election if necessary).  Plus, David Vitter (R) is running for governor of Louisiana.  So if he wins, that’s another seat that opens up.

As of now — and now is nearly 22 months ahead of the elections — the seats most likely to switch are Nevada (D to R) and Wisconsin (R to D).

Here’s the latest early-bird look at the 2016 Senate races:

For the record:  Let it be said that in the 2014 Senate races, I picked only ONE incorrectly — in North Carolina, where GOP challenger Thom Tillis ousted Democratic incumbent Kay Hagan.


Jan. 20 — President Obama’s State of the Union address to Congress.

March 7 — 50th anniversary of the “Bloody Sunday” March on Selma. 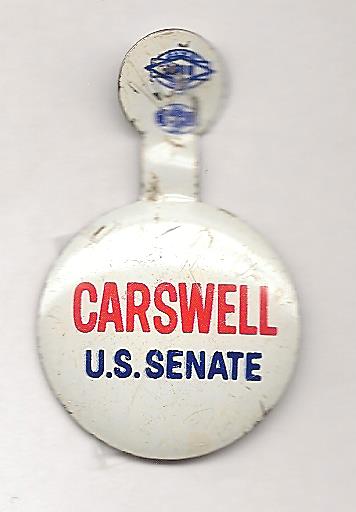 This Day In Political History:  President Nixon nominates G. Harrold Carswell, a member of the 5th Circuit Court of Appeals, to the U.S. Supreme Court seat vacated in May of 1969 by Abe Fortas.  Nixon’s original choice for the seat, Clement Haynsworth, was rejected by the Senate in November.  Haynsworth was doomed by conflict of interest charges; Carswell has a civil rights record that some consider hostile, though Nixon calls him a “strict constructionist” (Jan. 19, 1970).  Carswell’s nomination will also be voted down by the Senate, 51-45, on April 8th.  Later in the year he unsuccessfully sought the Republican nomination for the Senate from Florida.