There’s a wonderful interview in this week’s Political Junkie podcast with Beau Willimon, the showrunner and creator of “House of Cards,” the thrilling series on Netflix that is weeks away from the launch of Season Three.  Beau argues that his show is not about politics but about power … and not about cynicism but about optimism.

Since you’re not about to argue with the guy who has created far and away one of the best shows on television, then maybe you won’t argue with me when I say … ScuttleButton is not about taxing your brain, it’s about solving ridiculously easy button puzzles with a smile.

Anyway, that’s my story for this week. 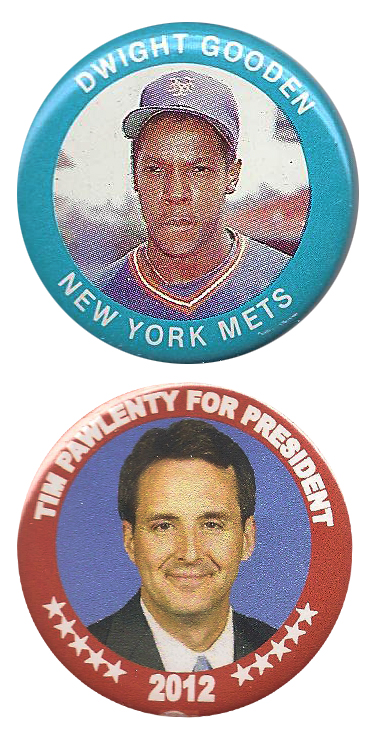 How to Play
ScuttleButton, as you may know, is that weekly waste-of-time exercise where we post a vertical sequence of campaign buttons. Your job is to take one word (or concept) per button and add ’em up to arrive at a famous name or familiar expression. Guess the correct phrase and you could be the proud winner of the coveted Political Junkie button!

Dwight Gooden/New York Mets — The National League Rookie of the Year in 1984 and at one time, arguably, the best pitcher in baseball.

Tim Pawlenty for President 2012 — The former governor of Minnesota and yes, a guest on this week’s Political Junkie program, he was briefly a Republican presidential hopeful but withdrew in August 2011.

So, when you combine Gooden with Pawlenty — and I know, this one was a toughie — you probably get …

Good ‘n Plenty.  That licorice candy that, for some reason, people like. Certainly Choo Choo Charlie liked it.