Reubin Askew, whose election as governor of Florida in 1970 heralded the beginning of the “New South” — but whose belated presidential run 14 years later went nowhere — died Thursday morning.  He was 85 years old and had been suffering from pneumonia. 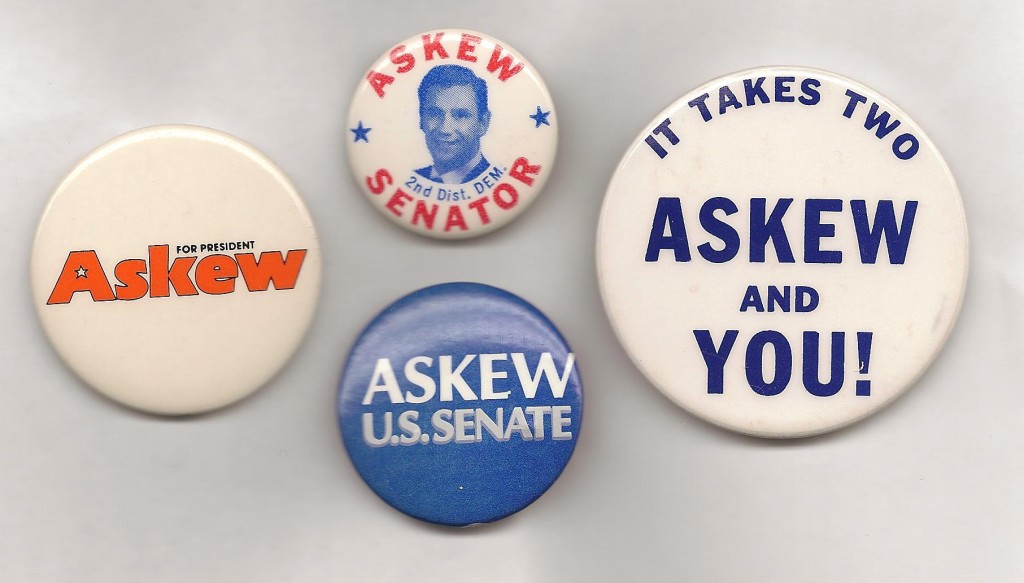 Askew was a little-known state legislator from Pensacola when he decided to run for governor in 1970.  His goal was to defeat Claude Kirk, the state’s first GOP governor since Reconstruction, who had alienated lawmakers of both parties for his erratic behavior.  But before that he had to get by a strong Democratic field, led by state Attorney General Earl Faircloth.  Faircloth’s leading challenger in the primary was thought to be Chuck Hall, the liberal mayor of Dade County (Miami).  But Askew, running a progressive campaign aimed at tax reform and fairness — and never attacking any of his fellow Democrats — stunned observers by finishing a strong second.  And his momentum never stopped.  He easily defeated Faircloth in the runoff.  In the general election campaign against Kirk, he continued his tax reform themes, calling for higher taxes on corporate profits.  And many Republicans, turned off by Kirk’s personality and style of governing, bolted to Askew.  He beat Kirk with 57% of the vote.

He immediately became a rising star in the party.  Early in 1972 he was named as the keynote speaker for that summer’s Democratic National Convention (held in Miami Beach).  George McGovern singled out Askew as a potential running mate and later offered it to him.   (He turned it down.)

The convention turned out to be a mess — witness McGovern accepting the nomination in the wee hours of the morning, well past prime time, not to mention his ill-fated choice of Tom Eagleton for VP.  But Askew’s well-received keynote address was populist in tone, talking about the need to form a coalition of “black and white, young and old, North and South, right and left, some of the rich, most of the poor, and millions of over-taxed and overcharged middle-income Americans as well.”

By nearly all accounts, he was a successful and popular governor.  He restructured the state’s tax program, revamped the court system, battled for ethics reform and pushed through new conservation laws.  He appointed the first black justice to the state Supreme Court.  True, conservatives were displeased with some of his actions, notably his advocacy of busing to achieve desegregation in schools.  And many of the decisions he made took power away from local officials.  But he easily won a second term, with 61%.

The John F. Kennedy School of Government at Harvard University rated him as one of the nation’s top 10 governors of the 20th Century.

Still, he resisted calls for him to become a presidential candidate.  He sat by and watched another “New South” governor, Georgia’s Jimmy Carter, march to the nomination and the White House in 1976.  By the time Askew finally decided to run, it was 1984.  And too late.  An opponent of abortion, defender of the death penalty and supporter of “free trade,” he found himself at odds with pro-choice and labor organizations.  He hadn’t been on a ballot in a decade and the national fascination with him had been long gone.  The focus was now on Walter Mondale, Gary Hart, John Glenn and Jesse Jackson.  Askew finished last in the New Hampshire primary with just 1% of the vote.

He made one last attempt at public office, declaring for the U.S. Senate in 1987 but was out of the race within a year, citing weak fundraising.

Askew never reached the White House, the goal that many envisioned for him during the early stages of his political career.  But he became one of the great leaders in Florida’s history, serving with dignity and decency.