Say what you want about Rand Paul, but he has been very meticulous in the steps he’s been taking on the road to his probable bid for the 2016 Republican presidential nomination.  Well aware of how his father failed to broaden his support during his own White House runs — and cognizant that many fringe characters were part of the Ron Paul Revolution — Rand Paul has been carefully reaching out to the party mainstream without backing down from his libertarian-ish principles.  So he has not let up on his battles against government surveillance, government spending and government foreign policy (aid/drone/war) decisions.

At the same time, he — probably more than anyone else in the GOP — has been calling for changes in the party.  He’s been embracing 20-somethings, blacks and Latinos, saying Republicans will never grow if it stays stuck as the older, white man’s party.  He talks about unfair drug laws and discriminatory prison sentencing.  He talks about inclusion.  He gave speeches at Howard University and Berkeley.  He even talks about Pink Floyd.  And, unlike his dad, he actually endorsed and campaigned for Mitt Romney in 2012.

He is not, it should be noted, a tried and true libertarian.  He opposes, for example, same-sex marriage and abortion rights.  It is, after all, the Republican Party nomination he’s seeking.  If nothing else, it’s a delicate balancing act.

But nowhere is that balancing act more precarious for him than in this year’s Senate races.  He has endorsed his fellow Kentucky senator, Mitch McConnell, even though the Republican Senate leader is facing a Tea Party challenge in the May 20 primary.  Jesse Benton, the campaign manager for both père et fils Paul, is part of the package deal; he is McConnell’s campaign manager this year as well.  Some conservatives have grumbled at Paul’s endorsement, arguing that McConnell is everything that’s wrong with the Republican Party.

But if the situation in this year’s Kentucky Senate race is a bit uncomfortable for Paul, it’s potentially treacherous for him in today’s primary contest in North Carolina.  There, the clear Republican frontrunner is Thom Tillis, the speaker of the state House, who has won over party leaders by pushing through a very conservative agenda in the legislature and running a very polished campaign.  Polls show him with the best chance at knocking off Sen. Kay Hagan (D) in November.  He has raised the most money.  But, perhaps because of some comments he’s made about the Affordable Care Act and the fact that he’s been the beneficiary of support from American Crossroads (headed up by tea party critic Karl Rove), conservatives see him as suspect.  Thus, some tea party groups are backing Greg Brannon, an obstetrician making his first bid for office, while some religious conservatives are supporting Mark Harris, a Baptist minister.

It’s pretty difficult to make the case that Tillis is not a strong conservative; just take a look at what’s gone on in the legislature.  And with the N.C. seat thought to be crucial for the GOP’s hopes of winning the Senate in November and polls showing he has the best chance to do it, Tillis is getting a lot of national out-of-state money as well as big-name endorsements: Gov. Pat McCrory, the U.S. Chamber of Commerce, Jeb Bush, Haley Barbour and Romney, to name just some. Here’s an ad from American Crossroads making the case for Tillis’ conservative bona fides.

And there’s no question that Hagan supporters fear Tillis the most; this commercial singles him out.

Plus, it’s pretty easy to make the case that Brannon has some serious baggage … everything from comments he’s made comparing food stamps to slavery and insinuations about who was behind the 9/11 terrorist attacks, to a recent civil suit that said he misled and lied to investors and was fined $450,000.  (Click here for a post from Buzzfeed about some of Brannon’s more controversial statements.)

More important, it’s even easier to make the case that if Tillis doesn’t win the nomination outright in today’s primary and is forced into a July 15 runoff, it will distract from the GOP’s effort to spend its focus and money on Hagan.  Instead, it will be nine weeks of more R vs. R infighting.

Enter Rand Paul.  Back in October, he endorsed Brannon.  But yesterday, he did more than that.  He campaigned for him in Charlotte, calling him the true principled conservative and labeling Tillis the “status quo.”  The event was widely covered by state and national media, and it presumably gave Brannon a huge boost.

The risks for Paul are enormous.  If Brannon fails to hold Tillis to under 40%, then Paul’s hopes of becoming a kingmaker will be damaged.  But if the endorsement does force Tillis into a July runoff — and the intra-party squabbling hurts the GOP’s effort to unite to defeat Hagan — Paul might very well take the blame.  (Or, if you’re a Hagan supporter, the credit.)

Of course, all of this gets thrown out the window if Brannon wins the runoff and defeats Hagan in November.  But that scenario is hard to envision.

Rand Paul didn’t make tea party folks happy in Kentucky with his endorsement in Kentucky, but the risks are even greater with what he’s saying to the establishment in the Tar Heel State this week.  It may not matter when we finally get to 2016.  But if Republicans fail to win a Senate majority because of North Carolina, it might.

(Click here for analysis of the full schedule of May primaries.) 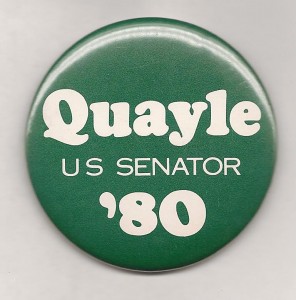 This Day In Political History:  Republican voters in Indiana nominate Rep. Dan Quayle to take on Sen. Birch Bayh in November, and in North Carolina, the GOP nomination goes to college professor John East, who is opposing Sen. Robert Morgan in the general election (May 6, 1980).  Both Quayle and East will be part of the GOP wave in November, as the party wins control of the Senate for the first time since 1954.