The Russian advance into Crimea, Sen. John McCain says, “has exposed the disturbing lack of realism that has characterized our foreign policy under President Obama.”

Mitt Romney says Obama’s failure to act “has diminished respect for the U.S. and made troubles worse,” that the president’s “tough talk about a red line in Syria” sent a signal to Russian President Vladimir Putin that the U.S. was just bluffing.

A Washington Post editorial, under the header “Bark but no bite,” castigates Obama’s response to the situation in Ukraine, saying he “has been holding back on tougher measures while offering Mr. Putin face-saving ways to de-escalate,” a policy that “can’t succeed if Mr. Putin is determined … to crush Ukraine while ignoring Western reaction.”

Many have opined that Obama was tougher on Zach Galifianakis than he was on Putin.

Thus far the president’s response to the referendum and anticipated annexation of Crimea has been to freeze the assets and ban the travel for 11 Russian and Ukrainian people, including Vladislav Surkov, a longtime Putin adviser; Dmitri Rogozin, a deputy Russian prime minister; and Valentina Matviyenko, the chairwoman of the upper house of Russia’s Parliament.  If that doesn’t force Putin to start shaking in his boots, sarcastic critics have said, then nothing will.  It’s the greatest crisis between Russia and the U.S. since the Cold War, and this is the U.S. response?  (Or as the Washington Post’s Dana Milbank wrote, “Crony talk may sound strong to an American audience, but there’s little in the sanctions that would actually impair Putin’s cronies or punish Russia for its actions.  Russians seemed to be immune to Cronies Disease.”

Of course, there’s another question to be asked here:  What’s the alternative?  Sending troops to Ukraine?  With ultra-nationalists on the rise in Moscow and itching for conflict with Washington, such a move could make the 1962 Cuban Missile Crisis look like playtime in the schoolyard.  Sure, the U.S. is not happy about the referendum in Crimea, which it says was rigged and thus won’t be recognized.   At the same time, Russians were not happy about the overthrow of Ukraine President Yanukovych and they don’t recognize that either.  The ultimate lesson is that in the history of tension and conflict between Moscow and Washington, a lot of tough and even angry words get said, but ultimately cooler heads prevail.  And that’s fine, except perhaps for those who don’t remember how much fun it was to have a world war to deal with.

But what about any electoral fallout in the U.S.?

For the most part, foreign policy tensions do not play a significant role at the voting booth.  If it had, President George H.W. Bush, riding high after success in the 1991 Gulf War, would have won a second term.  Sometimes, though, there is feedback in November; witness the Democrats’ unexpected fortunes in the 1962 midterms after Kennedy stood up to Khrushchev over the missiles in Cuba.  Of course, Cuba was in our backyard.  Other crises were not.  And that may be the difference.

It’s still too early to say if Ukraine will be another Czechoslovakia, or another Hungary.  Or even another Cuba.  Polls continue to show a lack of confidence in Obama’s leadership, especially on foreign policy issues.  So we’ll see if this figures into the 2014 midterm calculations.  But here’s a quick look at these earlier U.S. vs. Russia/Soviet Union crises, and how they played out politically.

Czechoslovakia, 1968.  In language remarkably similar to what we’re hearing today, Moscow announced in August that “counter-revolutionary” and fascist elements were fomenting trouble in Prague and that people in Czechoslovakia had pleaded with the Soviet Union and its Warsaw Pact allies to send in troops to save them.  And so they obliged.  The action came just as the Democrats were about to hold their nominating convention in Chicago.  And the Dems made sure to note Moscow’s actions in their party platform:

“The conscience of the entire world has been shocked by the brutal and unprovoked Soviet aggression against Czechoslovakia. By this act, Moscow has confessed that it is still the prisoner of its fear of freedom. And the Czechoslovakian people have shown that the love of freedom, in their land and throughout Eastern Europe, can never be crushed. …

The tragic events in Czechoslovakia are a shocking reminder that we live in a dangerous and unpredictable world. The Soviet attack on and invasion of a small country that only yesterday was Moscow’s peaceful ally, is an ominous reversal of the slow trend toward greater freedom and independence in Eastern Europe. The re-imposition of Soviet tyranny raises the specter of the darkest days of the Stalin era and increases the risk of war in Central Europe, a war that could become a nuclear holocaust.”

But did the Soviet invasion, less than three months before the presidential election between Richard Nixon and Hubert Humphrey, become a major issue?  Not at all.  Eugene McCarthy, who was still fighting for the Democratic nomination, decided that the invasion was not an especially big deal.  Campaigning in September, Humphrey said, “Despite the tragedy of Czechoslovakia,” he did not believe “that we should forgo the hope and indeed the practice of trying to build better relationships economically, politically and culturally with Eastern Europe.”  For his part, Nixon didn’t attack Humphrey or President Lyndon Johnson for what happened; he only said that he wanted to postpone the signing of the nuclear nonproliferation treaty until “the posture and intentions of the Soviet Union” could be “reassessed at a later time.”

Cuba 1962.  By September of 1962, there were signs that the Soviets were beginning a serious military buildup in Cuba.  Republicans, led by Sens. Homer Capehart of Indiana and Kenneth Keating of New York, said there were Russian troops just 90 miles away from the U.S., and charged that President Kennedy’s “appeasement” policies were making the situation worse.  Former Vice President Richard Nixon, campaigning for governor of California, called for a U.S. Navy quarantine of Cuba.  For the most part, Democrats were content to defend Kennedy and attack the GOP for its rhetoric.  But the anxiety in the nation was spreading.  On Sept. 20, the Senate voted 86-1 expressing U.S. “determination … to prevent by whatever means may be necessary, including the use of arms, the Marxist-Leninist regime in Cuba from extending by force or threat of force, its aggressive or subversive activities to any part of this hemisphere.”  The U.S., the resolution stated, was determined “to prevent in Cuba the creation or use of an externally supported military capability endangering the security of the United States.”  Six days later the House passed the same measure by a 384-7 vote.  (All dissenters were Republicans who felt the language wasn’t strong enough.)

One state where the Cuba crisis was being played was in Indiana, where Capehart, a three-term Republican, was being challenged by a 34-year old state legislator named Birch Bayh.  Capehart, hitting the Democrats on foreign policy issues, called for an immediate invasion of Cuba.  Bayh mocked Capehart for “running around the country declaring war on an applause meter basis.”  Capehart was thought to be in trouble, but his leadership on the Cuba issue was helping him in the polls.  Foreign policy was also being heard in other Senate races as well.  In Pennsylvania, Rep. James Van Zandt (R) said Sen. Joseph Clark (D) was “soft on communism” and that his policies were a “menace to the United States.”  In South Dakota, Sen. Joe Bottum, a Republican appointed to fill a vacancy and clearly favored to win a full term, called his Democratic opponent, former Rep. George McGovern, a “radical” and a “stooge of the president.”  In Arkansas, Republican candidate Kenneth Jones blamed the situation in Cuba on Sen. J.W. Fulbright (D) and other “liberal” advisers “close to an inexperienced president.”

Whatever electoral momentum the Republicans may have had on Cuba ended on Oct. 22, when JFK went on national TV calling for a quarantine on Cuba to prevent more Soviet supplies from coming in.  Secretary of State Dean Rusk said the U.S. had “incontrovertible evidence” of Soviet missile bases in Cuba.  Kennedy and Vice President Johnson immediately stopped all of their political campaigning on behalf of Democratic candidates and instructed the Cabinet to follow suit.  And when Moscow backed down, on Oct. 28, saying that Khrushchev had ordered the dismantling of its missile bases, Kennedy became the clear winner.  And Republicans, deprived of a potentially successful campaign issue, had nowhere to go.   (Among the big Democratic wins:  Bayh ousted Capehart.)   Rep. Bob Wilson (R-Calif.), chairman of the National Republican Congressional Committee, said GOP chances for major gains had been “Cubanized.”

Hungary 1956.  As the campaign between President Dwight Eisenhower and Democratic challenger Adlai Stevenson was coming to a close, a series of anti-communist uprisings began in Hungary.  Eisenhower treated the situation cautiously, refusing to encourage any revolt that would enrage the Kremlin.  And Stevenson dismissed GOP claims that the uprisings were a result of American foreign policy, saying that, in truth, the U.S. was “caught off guard” by it all.  And when Soviet troops made it look like they were acquiescing to the protests by moving out of Budapest, the rebels were claiming victory.  Hungarian Premier Imre Nagy boasted, “The revolution has triumphed.”  And Eisenhower was encouraged: “If the Soviet Union indeed faithfully acts upon its announced intention, the world will witness the greatest forward stride toward justice, trust and understanding among nations in our generation.”

But the troop movements were a ruse.  Two days before the U.S. election, the Soviet Union invaded Hungary to wipe out the revolution.  Moscow said Nagy “turned out to be an accomplice of the reactionary forces.”  Budapest pleaded for Western support.  Ike pledged $20 million in U.S. food and medicines.  But that was it; no talk of a military response.  And  the attack came too late to become an issue in the campaign.

The situation in Ukraine is still developing. 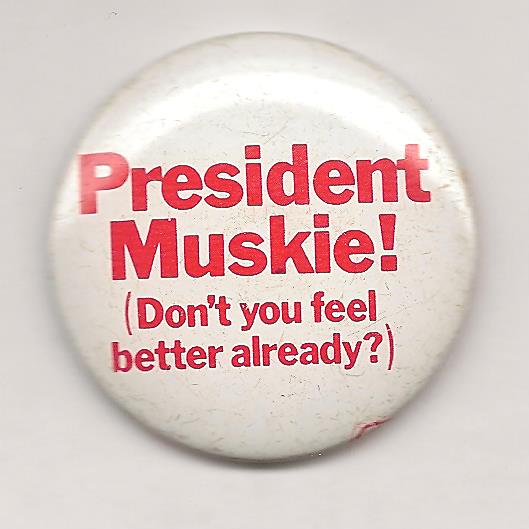 This Day In Political History:  The Harris Survey shows Sen. Ed Muskie (D-Maine), considered the frontrunner for his party’s presidential nomination in 1972, leading President Richard Nixon by a 48-42% margin.  That’s up from his three-point advantage of 43-40% in January.  With Alabama Gov. George Wallace in the race, the margin is Muskie 44, Nixon 39 and Wallace 12 (March 18, 1971).