One thing we learned this week is that it’s not easy to defeat a House majority leader in a primary.  Before David Brat took out Eric Cantor on Tuesday, it hasn’t happened since … well, ever.

But it has been becoming more commonplace lately to defeat Republican senators in a primary.  It happened twice in the 2010 cycle, once in 2012 and, unless there’s a big surprise coming, there will be one more on June 24 in Mississippi.

Doesn’t sound like a lot?  Well, what makes this so remarkable is that in the 40 years between 1962 and 2002, only six GOP senators TOTAL were knocked off in their own primaries, and two of them were appointees.  It was a pretty rare occurrence.

Now, in the age of tea party anger, this is becoming more and more common.  The conservative and moderate wings of the GOP — long at war with each other in the presidential nominating battles of 1952 (Taft vs. Eisenhower), 1964 (Goldwater vs. Rockefeller) and 1976 (Reagan vs. Ford) — are now duking it out in congressional races in nearly every region of the country.  Now, instead of one victim per decade, it’s becoming at least one per cycle.  In 2010 it was Robert Bennett of Utah (who was denied another term at the state convention) and Alaska’s Lisa Murkowski (though she managed to keep her seat with a rare write-in victory in the general election).  In 2012 it was Dick Lugar in Indiana.  And nobody will be surprised if Thad Cochran loses later this month in Mississippi.   Bennett, Murkowski and Lugar (plus Cochran) were all targeted by tea party conservatives.

Now, given the fact that these folks on the right had upped the ante this year and targeted at least a half dozen GOP incumbents — including Lindsey Graham of South Carolina last week, who easily avoided being forced into a runoff — one might be tempted to say that the tea party’s scorecard for 2014 was pretty dismal.  Another way of looking at it, of course, is that nearly as many Republican senators were upended for renomination in the past four years as there were in the 40 years up to 2000.

Here’s a look at the Republican Senate incumbents who lost their bid for renomination in those pre-tea party days, from 1962 to 2002 —  and what happened to the seat in the general election.

1962:  Maurice Murphy (N.H.) — GOP lost seat.  The death of Styles Bridges (R) in November 1961 robbed the Senate of one of its leading conservative voices.  The thinking at the time was that Gov. Wesley Powell, a Republican who had long wanted to be in the Senate, would appoint Bridges’ widow Dolores to the seat and then run himself in the 1962 election.  Powell instead appointed Murphy, the state attorney general who was also a conservative, and said he himself would forgo the race.  Murphy decided he would be no interim incumbent and said he would run.  And that opened up the floodgates.  Rep. Perkins Bass, a moderate Republican, declared his candidacy as expected.  So did the state’s other House member, liberal GOP Rep. Chester Merrow.   Mrs. Bridges, the 46-year old widow, was furious she didn’t get the appointment.  A strong right-winger — she wondered aloud whether or not President Kennedy was a Communist — Bridges announced she would run too and won the support of the Manchester Union-Leader.  So the unintended consequence of Styles Bridges’ death is that it created a free-for-all in the GOP.  The campaign was personal and vitriolic.  Bass narrowly won the four-way primary but the wounds never healed.  Thomas McIntyre, the former mayor of Laconia, capitalized on the GOP dissension and won the November election — the first Democrat to win a N.H. Senate seat since 1932.

1968:  Thomas Kuchel (Calif.) — GOP lost seat.  Kuchel, the Republican Minority Whip, was unapologetic for his refusal to back Barry Goldwater and GOP Senate candidate George Murphy in 1964 or Gov. Ronald Reagan in 1966.  By 1968, conservatives were ready for revenge.  They backed Max Rafferty, the right-wing state superintendent of public instruction.  (For his part, Reagan remained neutral in the primary.)  Charging that Kuchel supported President Lyndon Johnson more than any other Senate Republican, Rafferty campaigned against what he called the “four deadly sins” — violence, pornography, drugs and lawlessness — and won an upset victory.  Trailing in the polls throughout the campaign, Rafferty beat Kuchel by about 70,000 votes out of more than 2 million cast.  But for the general election, he was pegged as too far out of the mainstream, and many Kuchel supporters bolted to the Democratic nominee, former state Controller Alan Cranston.  Cranston, a liberal, beat Rafferty by more than 300,000 votes (52-47%).

1978:  Clifford Case (N.J.) — GOP lost seat.  Case was perhaps the most liberal Republican in the Senate, and Garden State conservatives had never liked him.  A completely unknown GOPer challenged Case in the ’72 primary and got 30% of the vote.  So when former Ronald Reagan aide Jeff Bell challenged him in 1978, it had the potential for being suspenseful.  Case, who was 74 and seeking a fifth term, was late in responding to Bell’s attacks, while Bell was attracting national attention; Jack Kemp was among those who came into the state to campaign for him.  Case was betting that his superior organization would carry the day for him but he was mistaken; Bell surprised him by winning by some 3,000 votes out of more than 230,000 cast.  But like the California ’68 result above, Bell went into the general election portrayed as too far out of the mainstream.  And it didn’t help that his Democratic opponent was a celebrity, former New York Knicks star Bill Bradley.  Bradley clobbered him 55-43%, and Republicans haven’t won a Senate race in New Jersey since.

1980:  Jacob Javits (N.Y.) — GOP retained seat.  One of the reasons the New York Conservative Party was formed in 1962 was to ensure the defeat of two liberal Republicans, Gov. Nelson Rockefeller and Sen. Javits.  Because Rockefeller controlled the workings of the state GOP, Javits never had to face a primary challenge.  But Conservatives did run candidates against him in the general elections of 1968 (Jim Buckley) and 1974, and both times Javits finished with less than 50% of the vote in November.  By 1980, Rockefeller was dead and Empire State conservatives were on the ascendancy.  They badly wanted Rep. Jack Kemp to challenge Javits in the primary but he hesitated.  So Alfonse D’Amato, the presiding supervisor of Hempstead in Nassau County, jumped in the race.  With N.J.’s Case gone, Javits was the most liberal Republican in the Senate.  Apart from his age, another roadblock for the 76-year old Javits was that he was suffering from a neuromotor illness that hampered his walking.  The shock about the results was not so much that D’Amato won but by how much: 56-44%.  He beat Javits up and down the state, often by huge margins.  With Rep. Elizabeth Holtzman winning the Democratic primary, Republicans thought the seat would be lost.  But Javits, New York’s longest-serving senator in history, insisted on staying in the race, running on the line of the Liberal Party, which had also backed him in ’68 and ’74.  Javits attempted to run as a centrist, describing Holtzman as too far to the left and D’Amato too far to the right.  D’Amato’s argument was stronger:  he was the only moderate-conservative in a race against two liberals.  Javits only received 11% of the vote, but it was enough to split the left-of-center vote and enable D’Amato to win by some 80,000 votes out of nearly six million cast.

1996:  Sheila Frahm (Kansas) — GOP retained seat.  Not long after Sen. Bob Dole shocked the political world by announcing he would resign his seat to put his entire focus on his campaign against President Bill Clinton, Gov. Bill Graves named his lt. gov., Sheila Frahm, to succeed Dole.  But the Kansas GOP was going through some serious intra-party warfare between moderates (represented by Graves and Frahm) and conservatives.  Freshman Rep. Sam Brownback clobbered Frahm in the August primary that year by a 55-42% margin, just three months after her appointment, and went on to win the seat in November.

2002:  Robert Smith (N.H.) — GOP retained seat.  This was a rare instance of a Republican senator losing renomination to a less conservative challenger.  Smith’s downfall began in 1999.  With his quixotic bid for the GOP presidential nomination predictably going nowhere, he angrily quit the GOP — calling the party “an entrenched political industry” and “hypocritical” — became an independent, continuing his White House effort as a candidate of the right-wing Taxpayer’s Party.  To no one’s surprise, that didn’t take off either.  But when Sen. John Chafee (R-R.I.), the chairman of the Environment and Public Works Committee, died unexpectedly in October, Smith returned to the GOP fold and, thanks to Senate seniority tradition, became committee chairman.  His trashing of his party and his very strong views on an assortment of issues — the John Birch Society named him America’s most conservative senator — put him in jeopardy for a third term.  And that was something the Republican Party wouldn’t tolerate; they were anxious to regain control of the majority they lost in 2001 when Vermont’s Jim Jeffords became an independent and voted to organize the Senate with the Democrats.  Rep. John E. Sununu, son of ex-gov. and Bush White House chief of staff John Sununu, took Smith on in the primary and defeated him by eight percentage points.  Sununu went on to win the seat in November against Gov. Jeanne Shaheen.

That was then: 4 elected GOP senators losing a primary over the span of 40 years.  Now, a Republican senator seems to be going down each cycle.  And they’ve got their eyes on Cochran for the 24th.

It’s much harder to defeat a House majority leader in the primary.  Or it was until this week.

A question from the e-mailbag:

Q:  With Rep. Kevin McCarthy (R-Calif.) the likely next House majority leader, and with Nancy Pelosi remaining as minority leader, when was the last time a majority and minority leader were from the same state? — Scott Detrow, Sacramento, Calif.

A:  In the 1940s and ’50s, the tandem was John McCormack (D-majority) and Joseph Martin (R-minority) from Massachusetts.

Aug. 19 — Primaries in Alaska and Wyoming. 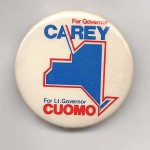