Let’s make it clear from the outset:  not many people have gone directly from Mayor to President.  I think the actual number is zero.

Not that there haven’t been those who tried.  Think Democrats Sam Yorty of Los Angeles and John Lindsay of New York in 1972.  And there was Larry Agran, the mayor of Irvine, Calif., who tried 20 years later.  None made it very far, certainly not to the national convention.  In fact, the last person to serve as mayor and then go on to become president was Calvin Coolidge, who was elected mayor of Northampton, Mass., in 1909.  Of course, he was later elected state senator, lieutenant governor and governor, before becoming vice president in 1921.  So it’s not as if his time as mayor was instrumental to his becoming Warren Harding’s running mate and eventually president. 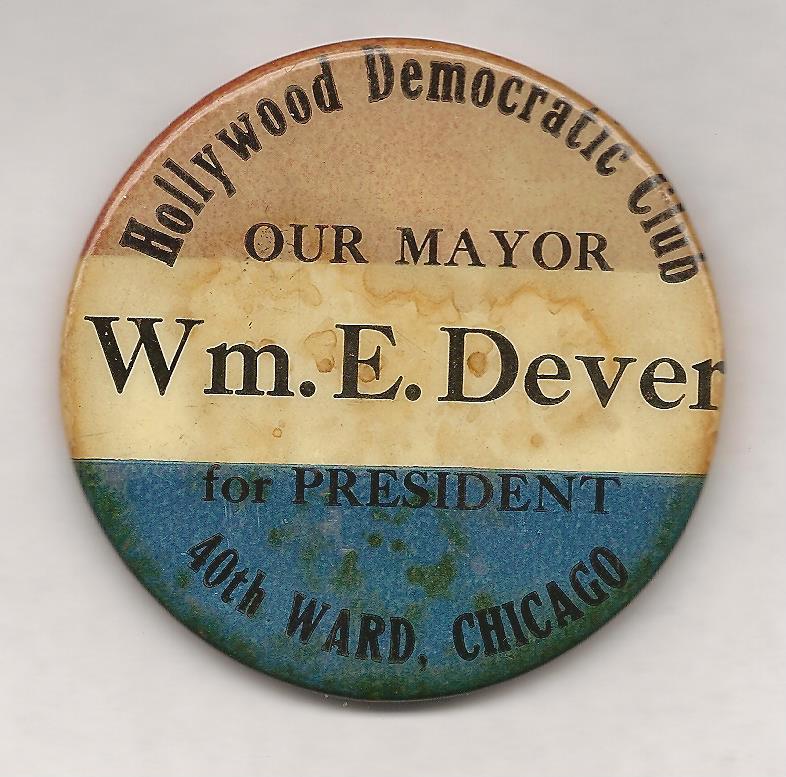 But there was another mayor, a mayor of Chicago in fact, who was hoping his successful battles against illegal bootlegging would propel him to the Democratic presidential nomination.  His name was William Dever, and I’ll be honest with you: I had no idea he fancied himself as a presidential candidate until I came across this button at last month’s meeting of the American Political Items Collectors in Tyson’s Corner, Va.  It’s not in the greatest shape, but neither was Dever’s bid for the 1924 Democratic presidential nomination.  Here’s the story:

Dever was elected mayor in 1923 when the larger-than-life but completely corrupt Republican incumbent, William Hale “Big Bill” Thompson, decided to retire.  As a judge with an unblemished record, Dever won in a landslide.

While personally opposed to Prohibition, he vowed as mayor to uphold the law.  And it meant taking on anyone and everyone who was profiting from the sales of beer and alcohol.  Dever’s “Great Beer War” won him national attention and put him on the list of potential presidential candidates for 1924.  While he didn’t make any kind of splash at the ’24 convention — which wasn’t decided until the 103rd ballot! — it was seen as a foregone conclusion that he would make another bid in 1928.

But nobody foresaw the effects of Dever’s crusade against bootleggers.  It led to increased violence in the city, with gangster-related killings and corruption becoming rampant.  By the time the 1927 campaign arrived, Dever was a beaten man and voters looked at the comebacking “Big Bill” Thompson not as the corrupt pol he had been during his earlier stint as mayor but as a charismatic, exciting candidate.  He won by nearly ten percentage points.

To this day, Dever remains the last Democratic mayor of Chicago defeated for re-election by a Republican … and, for now, the last Chicago mayor to try to make it to the White House.

3 thoughts on “The Mayor Of Chicago … For President?”