A good time as any to open up the Political Junkie to questions from our readers and listeners.

Q:  Donald Trump added three members of his administration from members of Congress.  Do the Democrats have a chance at taking over any of their seats? — Donna Thomas, Portland, Ore.

A:  At this point I would have to say no.  All come from heavily Republican states or districts.  Here are the three:

— Sen. Jeff Sessions (R-Ala.) for attorney general.  Sessions’ successor will be named by Alabama Gov. Robert Bentley, a fellow Republican.  Among the names thought to be under consideration are U.S. Reps. Robert Aderholt, Mo Brooks and Mike Rogers; state Sens. Del Marsh, Arthur Orr, Dick Brewbaker, Trip Pittman and Cam Ward; state Rep. Bill Poole; and state Attorney General Luther Strange.  Picking Strange would be, um, strange, considering the fact that he is currently leading the investigation into Gov. Bentley for potential ethics violations.  Whether he is chosen or not, Strange has said he would run for the seat in the 2018 special election.

Q:  Hillary Clinton won the popular vote by over three million votes.  Is that the largest plurality for a candidate who didn’t become president? — Barbara Washburn, Atlanta, Ga.

A:  It is, by a lot.  As of this writing, her lead over Donald Trump is 2,841,883, according to tallies by David Wasserman of the Cook Political Report.  Lest we forget, it is reaching 270 electoral votes — not the most popular votes — that gets you to the White House.  Here are the five popular vote winners who didn’t win the presidency that year:

Electoral vote:  Jackson 99, Adams 84, Crawford 41, Clay 37 (The election was thrown into the House, as no candidate received a majority of the electoral votes; Adams was declared the winner)

Q:  Mitt Romney, should he be chosen, would be the third failed presidential candidate in a row to be Secretary of State.  Has this ever happened before? — John Clouse, St. Paul, Minn.

A:  It has not.  There were two in a row more than a century ago when Philander Knox, the secretary of state under President Taft, was succeeded by William Jennings Bryan, who served under President Wilson.  But never three in a row.  In the 1980s, Ed Muskie (under President Carter) was followed by Alexander Haig (under Reagan), but Haig had not yet been a presidential candidate; that would come in 1988.

Q:  I don’t feel there is enough of a focus about presidential oaths. Can we trust the oath taker? Are there criteria? Is it important? Take a look at what Chief Justice Roberts and President Obama did in 2009. — Gary Pelphrey, Marietta, Ga.

A:  The wording of the presidential oath of office is made clear in Article II, Section One, Clause 8 of the Constitution, which reads, “Before he enters the Execution of his Office, he shall take the following Oath or Affirmation:—’I do solemnly swear (or affirm) that I will faithfully execute the Office of President of the United States, and will to the best of my Ability, preserve, protect and defend the Constitution of the United States.'”  As you correctly point out, in 2009 Roberts decided to recite the oath by memory — heck, it’s only 35 words! — and screwed up completely:

There was some dispute among constitutional experts that because Obama didn’t quite recite the actual wording of the oath, his swearing in on Jan. 20, 2009 was not considered official.  Whatever, the two had a “do over” the following day, in private.  (Some conspiracy theorists said that Roberts messed up on purpose because Obama, as senator, voted against his confirmation as Chief Justice.)

And here’s some fun trivia:  In 2013, Jan. 20th fell on a Sunday.  So Obama was sworn in for a second term in private on the 20th and in public, during the Inaugural ceremonies, the following day.  Thus, Obama joined FDR as the only president to be sworn in four times.

Q:  Will you be interviewing the other candidates for DNC chair, and will you be asking them questions like the one you asked Governor Howard Dean about Rep. Keith Ellison being an elected official?  I’ve loved the show/segment for years, by the way, and this was the first time I wondered whether an interview was conducted in a way that was meant to help a side in a competitive race. Tell me I’m paranoid. Yes, I support Ellison. — Jeff Dixon, Salt Lake City, Utah

A:  No reason to be paranoid.  I asked Dean (see PJ #154), who has since removed his name from DNC consideration, about his view that the national party chair should be a full-time position.  It wasn’t meant to “help a side.”  As it turned out, Ellison has since said that he will resign from Congress should he be elected Democratic national chair.  For the record, I have made several attempts to get Ellison on the Political Junkie, with no success.

And here’s a fun story from Judy Keim of West Chester, Ohio:

Hearing about Eugene McCarthy [see PJ #157] brings back an amusing memory. In 1968 my husband and I were grad students and we on a lark acquired a mynah bird and were working on teaching it to talk. Then, with his draft board breathing down his neck, we both bowed to the inevitable and joined the Army, leaving the bird behind with other students. We went back to visit months later and the bird had learned a phrase: “Vote McCarthy.”

Louisiana runoffs.  Voters in the Bayou State on Saturday have elected state Treasurer John Kennedy (R) to fill the Senate seat left by retiring Republican David Vitter.  Kennedy defeated Foster Campbell (D), a member of the Public Service Commission, by a 61-39% margin.  That makes the new Senate 52 R, 48 D.  Republicans also swept the two open House seats that went to runoffs:  The 3rd CD, vacated by Senate hopeful Charles Boustany (R), went to Clay Higgins, known as the “Cajun John Wayne.”  And in the 4th CD, which was given up by John Fleming, another GOP Senate hopeful, voters chose state Rep. Mike Johnson.


The Right Stuff.  John Glenn, the first American astronaut to orbit the Earth, and who served 24 years as a Democratic senator from Ohio, died on Dec. 8.  “Hero” is a term that may be thrown around too casually but Glenn was considered a genuine hero following his three voyages around the Earth in February of 1962.  A Marine fighter pilot during World War II who after his space travels became a close friend of  President John Kennedy, Glenn left the space program in 1964

and, with the urging of Attorney General Robert Kennedy, challenged Sen. Stephen Young in the Democratic primary.  But a bathroom fall resulted in a serious head injury and he withdrew from the race.  In 1970, when Young retired, Glenn ran again.  But Young, not to forget old slights, worked hard on behalf of the other Democrat in the race, Howard Metzenbaum.  With Glenn being treated more like a celebrity than a serious candidate, Metzenbaum pulled out the narrow win (he lost the general election that year to Rep. Robert Taft Jr.)  After Ohio’s other senator, William Saxbe (R), resigned in January 1974 to become Richard Nixon’s attorney general, Gov. John Gilligan appointed Metzenbaum to fill the seat.  But Glenn challenged Metzenbaum in the May primary and defeated him handily in the rematch.  Glenn went on to win four terms:  65% against Ralph Perk in 1974, 69% against Jim Betts in 1980, 62% against Rep. Tom Kindness in 1986, and 51% against Lt. Gov. Mike DeWine in 1992.  He retired in 1998.   In 1984 he sought the Democratic nomination for president but finished a poor fifth in the Iowa caucuses and an anemic third in New Hampshire.  A non-factor in the Southern states that voted on Super Tuesday, Glenn was out of the race in mid March.  He was also thought to be on Jimmy Carter’s shortlist for vice president in 1976, but his less-than-stellar keynote speech at that year’s convention is thought to have hurt his chances. 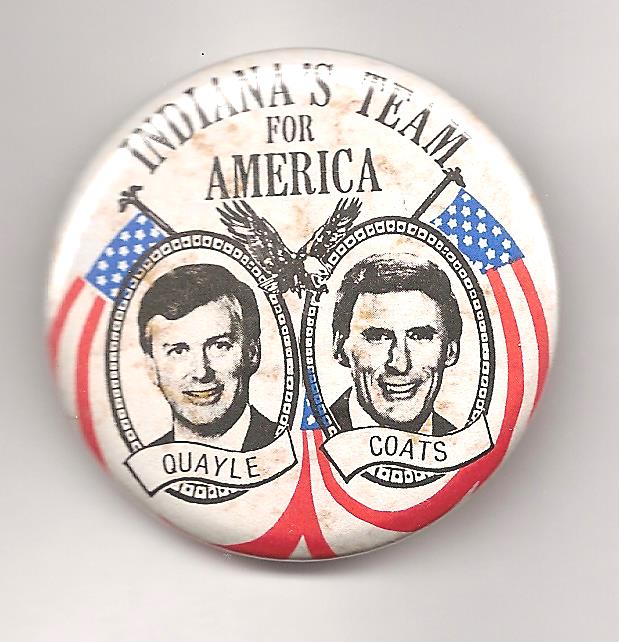 This Day In Political History:   Indiana Gov. Bob Orr appoints Rep. Dan Coats, a fellow Republican, to fill the Senate seat vacated by Vice President-elect Dan Quayle.  Coats had been a top aide to Quayle in the late 1970s and was elected to Quayle’s House seat in 1980 when Quayle ran for the Senate (Dec. 12, 1988).