It was late at night, the end of the 2004 Republican national convention, the last one ever for President George W. Bush.  People were filing out of Madison Square Garden when a group of delegates began chanting:  “We want Jeb!  We want Jeb!” 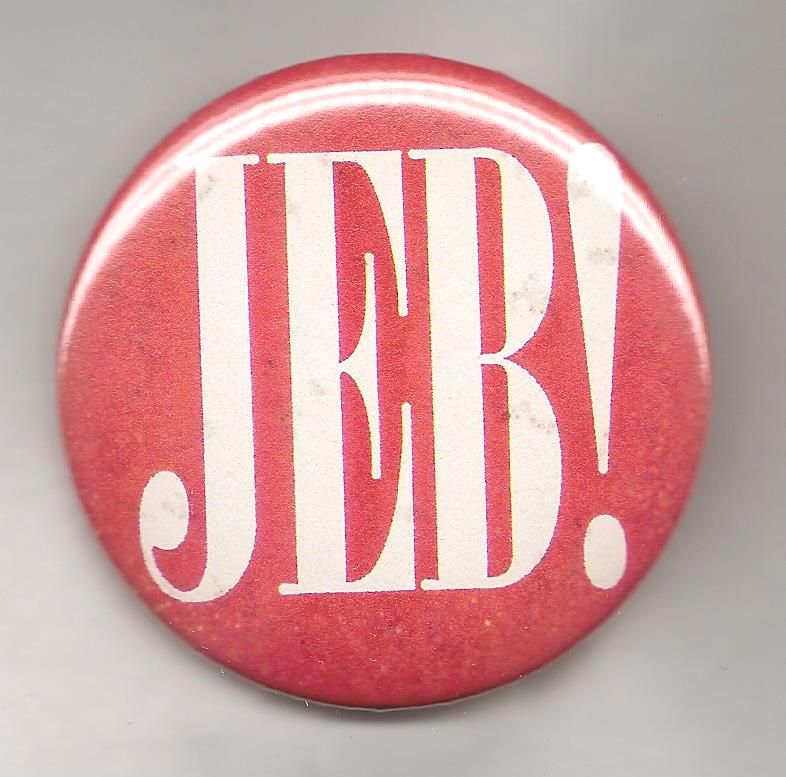 There were still two months to go before the contest against Democratic nominee John Kerry, but these people were already thinking 2008.  And why not?  George W. led Kerry in every poll at the time.  Republicans were confident.  It was time to look ahead.  Plus, for some in the party — including, reportedly, his parents — Jeb Bush was the Bush they wanted from the outset.  (Of course, in 1994, fate intervened; while W. was defeating Ann Richards in Texas, Jeb was losing, narrowly, to Florida Gov. Lawton Chiles.  Had the results in Florida been different, the GOP might have had a different national standard-bearer in 2000.)

Now no one knows for sure what he intends to do.  But his comments during last Sunday’s 25th anniversary celebration of the beginning of his father’s presidency were the latest indication that he is at least thinking about it.  Promising to have an answer by the end of the year, he said the question is, “Can one do it joyfully without being tied to all the convention of the here and now?”  He’s waiting to see, he added, if a candidate can “run with a hopeful, optimistic message, hopefully with enough detail to give people a sense that it’s not just idle words and not get back into the vortex of the mud fight.”

Even more so than his older brother, who was elected in 2000 on a “compassionate conservative” platform, Jeb Bush has long disdained the tone of contemporary politics.  And he’s made no secret that he is not a fan of the rhetoric and tactics coming from some of the more conservative elements of the party.  The GOP should be more about “winning the election, not making points,” he said to the audience in College Station, Texas.  But as someone who has made it clear he is not a fan of the Tea Party, he knows that should he run he will have to deal with their opposition — which could be quite vocal.  That’s all well and good, he says.  “I don’t feel compelled to run for cover when I feel like this helps our country,” he said of his support of Common Core education standards, which conservatives detest.  Whatever he decides to do, he seems eager to help define the party.

But nowhere does he seem to be more willing to attract conservative ire than in the issue of immigration.  “Yes, they broke the law,” he said on Sunday, “but it’s not a felony.  It’s an act of love and an act of commitment to your family. … It shouldn’t rile people up that people are coming to provide for their family.”  Not surprisingly, the Twitterverse lit up with outrage.

One reason some in the GOP are excited about a Jeb candidacy is that he has never been one to demagogue illegal immigrants.  Republicans, in their postmortem of the 2012 election, know full well that Latinos voted for President Obama with some 73% of their votes.  The GOP’s path to the White House is going to be more difficult if they don’t recognize the changing demographics of the country.  They argue that Jeb, like his brother George W., has a proven record in attracting Hispanic votes.

But before you get to the November general election you need to get through the primaries and caucuses, and talking about a path to citizenship, or even legal status, for the 11 million people here illegally, may be a non-starter for many GOP voters.

There is so much to consider.

The Bush name.  For many, including those in the GOP, “Bush” is still a four-letter word.  That’s probably one reason Jeb has said no each time since his brother left the White House.  But some Republicans — including New Hampshire’s Tom Rath, interviewed in this week’s Political Junkie podcast — argue that Bush fatigue is canceled out by the fact that his likely Democratic opponent will be Hillary Clinton.  Can you complain about Bush fatigue, the argument goes, and ignore Clinton fatigue?  The New York Times‘ Maureen Dowd asks the question less charitably: “Jeb has to figure out if W. has fouled the waters forever, or if Americans, lulled by the ex-president’s winsome paintings, have grown less disgusted by his disastrous wars, misadventures in torture and economic belly flop.”  Former Mississippi Gov. Haley Barbour acknowledged, “If his name was Jeb Brown instead of Jeb Bush, he’d be the frontrunner.”

Jeb as a candidate.  He hasn’t been on a ballot since 2002.  The game of politics, it is worth noting, has changed since he last ran for office.  Blame it on his rustiness, but he has not always gotten good reviews of his appearances before Republican and conservative groups.

Blame Chris Christie.  Perhaps the desire by some Republicans to have Bush run can be traced to the seeming collapse of New Jersey Gov. Chris Christie, who as of this writing remains snarled in the George Washington Bridge traffic jam brouhaha.  I never thought that Christie’s bravado (arrogance?) was going to wear well with Republican voters around the country to begin with, but this Jeb clamor among the establishment GOP and party money people really took off after Christie’s numbers began to tank.

Blame Rand Paul.  The rise of Paul has been spurred on by his decidedly anti-interventionist views on foreign policy.  The Iraq war, and for that matter the entire concept of George W. Bush’s foreign policy, was just wrong, in this view.  Of course, the history of the Republican Party shows that it has a different vision of the world, and many in the GOP establishment have made it clear that they view Paul as a serious threat.  And nobody can accuse Paul of being willing to continue the U.S.’ special relationship with Israel.  More than a few pro-Israel Republicans see Paul, like his father, former Rep. Ron Paul, as being hostile to the cause.

Wherefore Art Thou Rubio.  Bush’s advantages in Florida, where he served eight years as governor, might be tempered by the entrance of another Floridian, Sen. Marco Rubio.  Rubio’s star has dimmed among conservatives for his willingness to forge a bipartisan compromise in the Senate over immigration; some Tea Party groups have decided to stop inviting him to their events.  (At an Americans for Prosperity-sponsored forum last summer, he was repeatedly heckled by conservative activists who yelled, “No amnesty!”)  But he has been seeking to rebound by focusing on other issues.

Spoiling for a fight.  He is either trying to save his party from the clutches of the far right, or he is naively picking a fight that cannot end well for him.  In addition to his views on immigration and education, Jeb has said in the past that he would gladly accept a dollar in tax increases for every ten dollars in spending cuts — a view that is taboo among Republicans in Congress.  He has dismissed Grover Norquist and his no-tax-pledge-for-candidates cause.  Unlike McCain and Romney, who often felt the need to offer right-wing applause lines to keep restive conservatives from bolting, Jeb doesn’t seem to have the inclination.  Perhaps even more so than Eisenhower vs. Taft (1952), Goldwater vs. Rockefeller (1964) or Ford vs. Reagan (1976), the choice between Jeb and the Tea Party could irretrievably hurt the party’s chances for 2016.

This debate will go on for months, and there’s not much more to be said until we hear what Jeb Bush intends to do.

That other dynasty.  Ted Kennedy Jr., the 52-year old son of the late Massachusetts senator, announced on Tuesday (4/8) he’s running for an open seat in the Connecticut state Senate.  He is a co-founder of the Marwood Group, a health-care advisory firm.  The decision comes two years after another Kennedy, Joe Kennedy III — RFK’s grandson — was elected to fill the congressional seat of Barney Frank in Mass.  And, advises the Washington Post’s Sean Sullivan & Aaron Blake: “Mark your calendars for 2044: That’s when Edward Kennedy III (Ted Jr.’s son) plans to run for the U.S. Senate.  He announced his plans in 2009, at age 11.  How’s that for forward planning?” 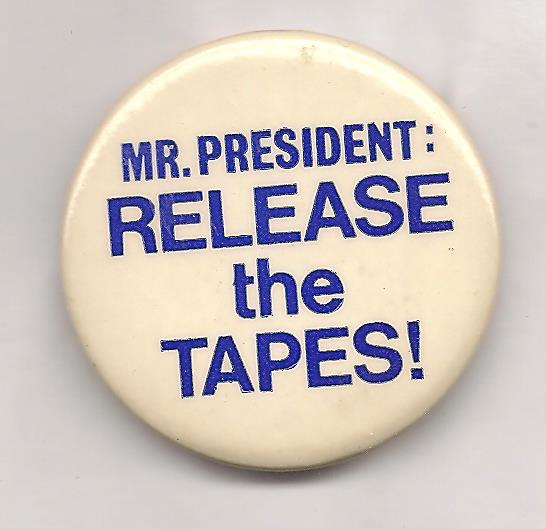 This Day In Political History:  Frustrated by the failure of the White House to respond to earlier inquiries, the House Judiciary Committee votes to subpoena President Richard Nixon in order to get tape recordings and other information concerning the Watergate break-in.  The Committee vote was 33-3.  Voting no were three Republicans: ranking member Edward Hutchinson (Mich.), Charles Wiggins (Calif.) and Trent Lott (Miss.).  It is the first time in history that a president is subpoenaed to give information to a congressional committee contemplating impeachment charges against him (April 11, 1974).