The death of legendary “top 40” radio personality Casey Kasem last week is the peg for this week’s Political Junkie column:  The top 40 House races of 2014.

We still have a ways to go before we know the nominees for all the key contests.  And so this list will be updated several times before the November elections.  In the course of these updates, some of the races will fall off the list, others may be added.  In the fall, we will present a detailed review of the battle for the House and offer predictions as to which way they will end.  But predicting November results in June is foolhardy.  And as we saw in Virginia’s 7th CD, predicting June results in June doesn’t work so well either.

Nonetheless, here is our list of what we consider to be the top 40 House races of the year.  This is not a ranking in the order of vulnerability; it is listed alphabetically by state.  No longer are Democrats seriously talking about getting the 17 seats needed to make Nancy Pelosi speaker once again.  That was always a hard sell, especially with a less-than-popular president of their own party in the White House.  If anything, it’s the Republicans who are looking to make gains in November.  And that’s indicative of the races listed below.

TEXAS 23:  Will Hurd vs. PETE GALLEGO

Don’t forget.  Our latest “predict the winners” contest for the June 24 primaries ends on Tuesday at 10 am Eastern.  Click here for details.

A question from the e-mailbag.  A conversation at Friday’s annual conference of PRNDI about Hillary Clinton reminded me of this question that was in my Feb. 8, 2007 Junkie column.  It still feels relevant today:

Q: My problem with Hillary Clinton is not that she’s cautious or calculating, as I’ve heard you say in the past, but her rationale for her vote in 2002 to go to war in Iraq. She says over and over again that she was misled by President Bush, that he lied about [weapons of mass destruction] but that she believed him. How does being duped by Bush become a badge of honor, a rallying cry for which she should become the Democratic nominee for president? What about all those who voted against the war? Why were they able to avoid being duped by Bush when she wasn’t? And while we’re on the subject, can you list how the Democrats in the Senate voted on the war in 2002? – Lisa Gross, Nyack, N.Y.

A: In the early morning hours of Oct. 11, 2002, the Democratic-controlled Senate voted 77-23 giving President Bush the authority to use military force in Iraq. Forty-eight of the Senate’s 49 Republicans voted yes; only Rhode Island’s Lincoln Chafee dissented. Of the 51 Democrats (including the independent from Vermont), 29 voted yes and 22 voted no. Here’s the Dem vote breakdown (*means no longer in the Senate):

One more note about Clinton, this from Lisa McNellis of East Haddam, Conn.: “It occurred to me that, should Hillary Clinton be elected president (and complete a full first term), there will be a period in American history of 24 years that this country was run by the same two families. That’s not exactly the history the Democratic Party (or any American) should be looking to make.”

Aug. 19 — Primaries in Alaska and Wyoming. 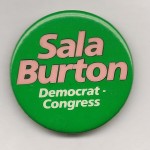 This Day In Political History:  In a special election called to fill the seat of her late husband, Sala Burton (D) easily wins in California’s 5th District, centered in San Francisco.  She gets 55% of the vote against ten opponents and replaces Rep. Phil Burton, a powerful liberal Democrat who died of an aneurism April 10 at the age of 56 (June 21, 1983).