The announcement Monday by Gov. Nikki Haley (R) and other South Carolina officials might have seemed like a no-brainer, in light of the recent horror in Charleston.  The Confederate flag and other remnants of the Civil War South, while a source to some of regional pride, have been used as symbols of racial hatred for years.  Dylann Roof, the 21-year old accused of the nine murders at the Emanuel AME Church, used such regalia to accompany his white supremacist philosophy.

Haley, joined by Sens. Lindsey Graham & Tim Scott, Reps. James Clyburn & Mark Sanford, Charleston Mayor Joe Riley and other Palmetto State pols, called on her state legislature to remove the Confederate flag from its place in front of the state Capitol building in Columbia.  The Stars & Bars is a “deeply offensive symbol of a brutally offensive past,” she said in her Monday press conference.  “The events of this week call upon us to look at this in a different way. … Today, we are here in a moment of unity in our state, without ill will, to say it’s time to move the flag from the capitol grounds.”

It was a new position for Haley, who was first elected governor in 2010 and who had insisted during her two campaigns that the flag was not a major issue.  But that all changed with the murders of nine African-Americans, who seemed to have been singled out solely because of their race, and by an alleged killer who seems to have been motivated by white racism and hate.

Her decision was far more definitive than what some Republican presidential candidates had been saying since the June 17 killings.  None had called for the removal of the flag; many had said it was up to the people of South Carolina.  Jeb Bush would only say he was confident South Carolina “will do the right thing.”  But as governor of Florida in 2001, he ordered the Confederate flag to be taken down from outside the state Capitol in Tallahassee and brought to a museum “where it belonged,” in Bush’s words.

The issue of the flag has long been a part of the politics of South Carolina, more so since it became the first Southern presidential primary state in 1980 and a key factor in determining the Republican nominee.  As the New York Times’ Jonathan Martin pointed out, both George W. Bush and John McCain said during the 2000 primary the issue was to be decided by people in the state, not outsiders … although after he dropped out of the race, McCain admitted “that he had compromised his principles because he was scared of losing” and that he “later wrote in a book that it was one of the worst decisions in his career not to have called for the flag’s removal.”

Back to Jeb Bush, he initially hesitated when asked if he thought the killings were racially motivated.  Ben Carson had no hesitations.  In a USA Today op-ed, he wrote, “Not everything is about race in this country. But when it is about race, then it just is. So when a guy who has been depicted wearing a jacket featuring an apartheid-era Rhodesian flag allegedly walks into a historic black church and guns down nine African-American worshipers at a Bible study meeting, common sense leads one to believe his motivations are based in racism. When a survivor of the ordeal reports that the killer shouted before opening fire, ‘You rape our women and you’re taking over our country. And you have to go’ — well, that sounds to me a lot like racial hatred.”

Other 2016 presidential hopefuls wanted no part of the flag debate.  Mike Huckabee said the state could decide whatever it wants, but it “most certainly does not” have anything to do with running for president.  Ted Cruz said that while he “understands” the “history of racial oppression and a history of slavery,” “I also understand those who want to remember the sacrifices of their ancestors and the traditions of their states.”  (The Washington Post’s Rucker & Gearan wrote that Cruz’s actions following the shootings “lacked sensitivity”: less than two days after the killings, Cruz “joked” that “in his home state of Texas, gun control means ‘hitting what you aim at.’  The next day, he campaigned at a shooting range.”)

Scott Walker, who is expected to announce his candidacy next month, said he would have no comment to make about the flag until those murdered in the church were buried.

No one came close to the position of Mitt Romney, the 2012 Republican presidential nominee, who Tweeted, “Take down the #ConfederateFlag at the SC Capitol. To many, it is a symbol of racial hatred. Remove it now to honor #Charleston victims.”

Iowa Straw Poll R.I.P.  The Iowa Republican Party announced on June 12 that the state’s straw poll, a meaningless but widely covered event that has been a fixture for the GOP since 1979, is no longer.  With more and more 2016 candidates saying they would bypass the Aug. 8 event this year — Jeb Bush and Mike Huckabee among them — party leaders said it was time to throw in the towel.  (Kathie Obradovich of the Des Moines Register talks about it in last week’s episode of The Political Junkie, starting at 21:11.) 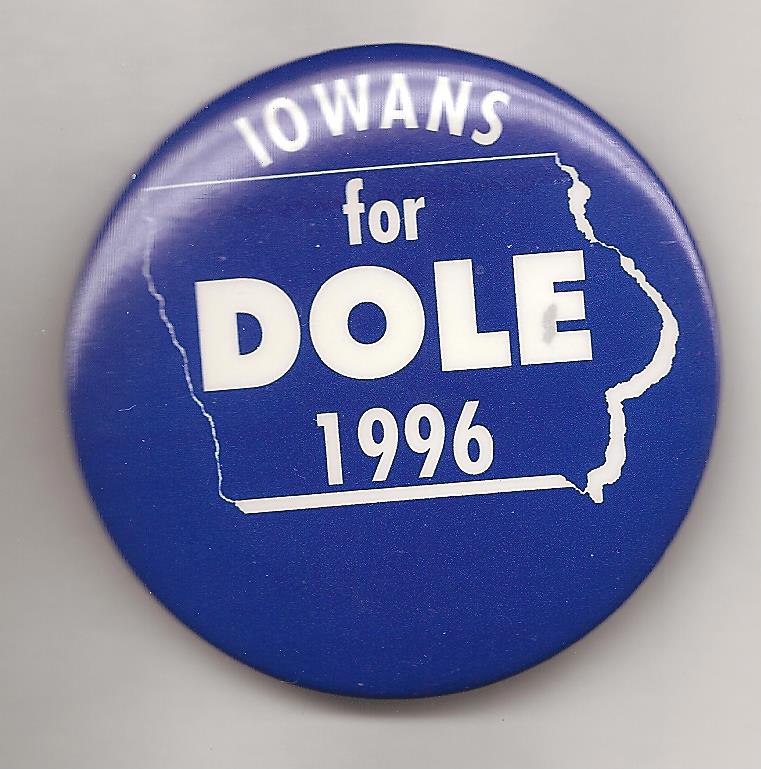 There was never anything scientific about the straw poll; candidates would bus in supporters, and participants would pay to cast their ballot.  Sometimes it gave us a little hint of what was to come in the following year’s caucuses, but other times — most notably with Michele Bachmann’s victory in the 2011 straw poll — it did not.

And because of the hype that was often associated with the straw poll results — and the expectations game — several candidates left the race immediately after the poll numbers were in.  That list includes Lamar Alexander and Dan Quayle in 1999, Tommy Thompson in 2007 and Tim Pawlenty in 2011.

Here’s a list of the straw poll winners since its inception in 1979:

Miscellany.  Maryland Gov. Larry Hogan (R) announced 6/22 he has advanced lymphatic cancer and will undergo a “very aggressive” chemotherapy treatment.  He joked that he has “much, much better” odds of beating this than he did in 2014, when he upset the Democratic candidate, Lt. Gov. Anthony Brown. … It wouldn’t surprise me if Donald Trump is out of the presidential race by this fall, when NBC has to decide whether to continue with Trump’s successful “The Apprentice” TV show.  Being the greatest president in the history of the U.S. is nice and all, but it won’t bring him the millions that another season of the program would. … So let’s get this straight: The inaccuracies/exaggerations/lies (take your pick) of Brian Williams were too serious to allow him to return to NBC News, but they’re no big deal in putting him on MSNBC?  There’s a message there somewhere. … The Daily Kos doesn’t think much of the idea, first reported by Tom Moran of the Newark Star-Ledger, that former Sen. Robert Torricelli (D) might be itching to return to the political arena should the indicted Sen. Bob Menendez (D-N.J.) be removed from office.  “The Garden State may be an ethical sewer, ” the lefty blog noted, “but even the Torch has to be dreaming if he thinks one corrupt former senator can succeed another.” 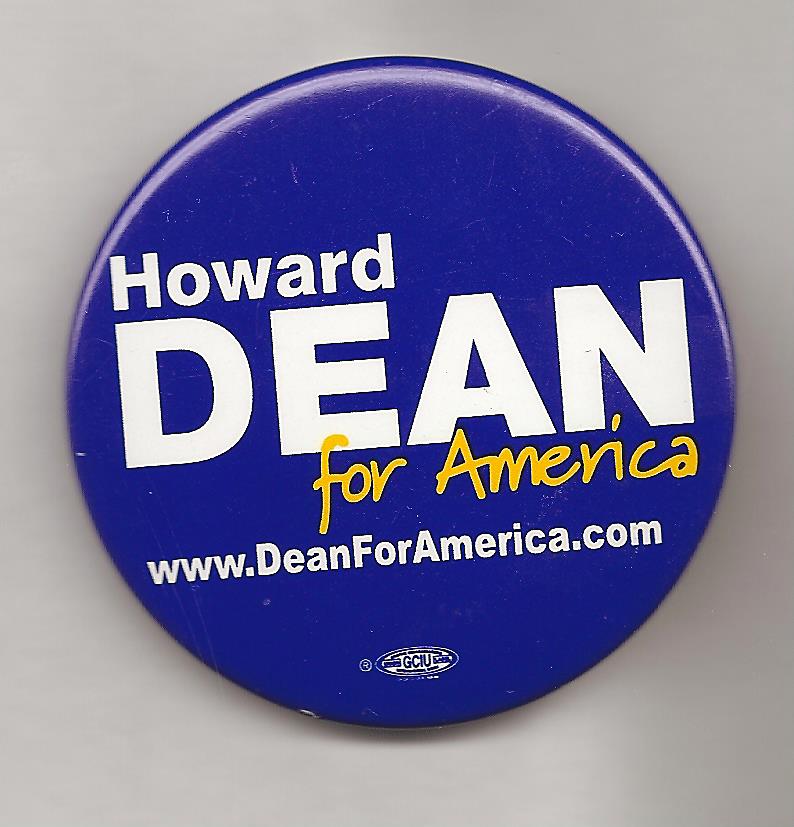 This Day In Political History:  Former Vermont Gov. Howard Dean declares his candidacy for the 2004 Democratic presidential nomination.  A leading opponent of the war in Iraq, Dean, in his speech at a Burlington rally, attacked President Bush’s economic, tax and foreign policies.  As governor (1991 through 2002), he pushed universal health care for children and endorsed civil unions for gays.  And as a candidate — he has effectively been running for a year — he became the first to recognize the fund-raising potential of the Internet (June 23, 2003).