We’ve never seen an election quite like this one, and we’ll probably never see an election day like this one.  With some 97 million votes having already been cast and most unlikely to be counted by November 3rd, the odds of states declaring winners on Tuesday are not great.  The era of going to bed Election Night knowing what happened may be a thing of the past.  But that story is for another day.

Here’s a state-by-state look at what’s at stake on Tuesday (presidential, Senate and governor), with electoral votes in parentheses:

Senate — Doug Jones (D) is the most vulnerable senator of either party.  He won a 2017 special election over the very discredited Roy Moore, and yet it was close.  The Republican nominee is Tommy Tuberville, the former Auburn football coach who trounced Jeff Sessions, the fired U.S. Attorney General who gave up his Senate seat to become Trump’s AG, in the GOP primary.  PICK: Tuberville (R gain).

Senate — Incumbent Dan Sullivan (R) may have a closer-than-expected struggle with Al Gross, running as an independent and backed by Democrats.  PICK: Sullivan.

President (11) — Since Harry Truman carried the state in 1948, Arizona has gone Republican every time, with Bill Clinton in 1996 being the lone exception.  PICK:  Biden.

Senate (special) — Martha McSally (R) gave up her House seat in 2018 to run for the Senate and was defeated by a fellow member of Congress, Kyrsten Sinema.  But after Sen. John McCain (R) died and appointee Jon Kyl (R) decided to serve for only a couple months, the governor appointed McSally to the seat.  The Democratic nominee is Mark Kelly, the former astronaut and husband of Gabby Giffords.  PICK:  Kelly (D gain).

President (9) — This is a longtime purple state that is turning more and more blue.  From 1968 thru 1988, Colorado voted Republican.  It voted for Bill Clinton in ’92, then three straight Republican, followed by three straight Democratic, including Hillary Clinton last time out.  PICK:  Biden.

President (3) — Solid for Biden, who represented Delaware for 36 years in the Senate.

Senate — Sen. Chris Coons (D), who succeeded Biden in the Senate, is being challenged by Lauren Witzke (R).  PICK:  Coons.

President (29) — The Sunshine State decided the 2000 election and is likely to play a major role this year as well.  PICK:  Tossup.

President (16) — Aside from voting twice for favorite son Jimmy Carter, plus once for Bill Clinton in ’92, Georgia has been a solidly Republican state.  But the demographics are starting to change, and Stacey Abrams, an African-American Democrat, came close to winning the governorship in 2018.  PICK:  Trump.

Senate (special) — This is for the seat of Kelly Loeffler (R), who was appointed earlier this year to succeed Johnny Isakson (R), who resigned because of health concerns.  With this being a special election, all candidates will run on the same ballot, regardless of party.  Her two main rivals are Rep. Doug Collins (R), who badly wanted the appointment and who has been endorsed by Trump, and Raphael Warnock (D), who is a senior pastor at the Ebenezer Baptist Church in Atlanta.  With 50% needed to win this thing, the race is likely to be decided in a runoff on Jan. 5, 2021.

Senate — Sen. Jim Risch (R) is being challenged by Paulette Jordan, the Democratic nominee for governor in 2018.  PICK:  Risch.

President (6) — Since Ronald Reagan’s landslide in 1984, Iowa has gone Democratic six out of eight times.  But it voted for Trump by more than nine points in 2016 after voting for Barack Obama twice in a row.  A recent Des Moines Register poll showed Trump up seven, while other polls give Biden the lead.  PICK:  Tossup.

Senate — Democrats haven’t won a Senate seat here since 1932, the longest losing streak in the country.  Rep. Roger Marshall is the GOP nominee for the seat being vacated by Pat Roberts.  Democrats are hoping Barbara Bollier will end the streak.  PICK:  Marshall.

Senate — Majority Leader Mitch McConnell isn’t the most popular pol in the state, not by a long shot, but he manages to win each time since first coming to the Senate in 1985.  Amy McGrath, who ran a competitive campaign for a House seat in the 2018 midterms, is the Democratic nominee.  PICK:  McConnell.

Senate — Sen. Bill Cassidy (R) is one of many candidates running in the state’s so-called “Jungle Primary,” where everyone is on the same ballot.  Should no candidate clear 50%, it goes into a runoff.  PICK:  Cassidy.

President (4) — Maine is one of two states (Nebraska is the other) that awards electoral votes to congressional districts.  Though that has been in effect for many years, the only time the split was realized came in 2016, when Hillary Clinton won the state but Trump carried the 2nd CD and thus picked up an electoral vote.  PICK:  All 4 for Biden.

Senate — Susan Collins (R) has managed to win four Senate terms because of her independence and willing to work across party lines.  But her votes in favor of Brett Kavanaugh to the Supreme Court and against Trump’s conviction during the impeachment trial have infuriated many of the Democrats who have been voting for her for years.  Her main opponent is Sara Gideon (D).  PICK:  Gideon (D gain).

President (16) — Trump’s surprise victory here in 2016 was instrumental in giving him the presidency; it ended the Democratic winning streak at five, starting with Bill Clinton’s win in ’92.  PICK:  Biden.

President (10) — The state hasn’t voted for a Republican presidential candidate since Richard Nixon in 1972, but Trump came very close in 2016 to pulling out a win.  PICK:  Biden.

Senate — Tina Smith (D) was appointed to fill the seat of the scandal-plagued Al Franken in 2018, and she went on to win the special election that fall.  She faces former Rep. Jason Lewis (R), who lost his House seat in 2018.  PICK:  Smith.

Senate — This is a rematch of the 2018 special election between Sen. Cindy Hyde-Smith (R), who was appointed to the seat that year after Thad Cochran (R) resigned, and former Rep. and Agriculture Secretary Mike Espy (D).  PICK:  Hyde-Smith.

Governor — Mike Parson (R) took over in 2018 when Gov. Eric Greitens, a fellow Republican, resigned in the midst of a sex scandal.  Parson, who had been vehemently anti-mask during the Coronavirus, tested positive for Covid in September.  That may have given Nicole Galloway (D) an opening.  PICK:  Parson.

Senate — Sen. Steve Daines (R) was thought to be cruising to re-election until Gov. Steve Bullock (D), a 2020 presidential also-ran, decided to challenge him.  PICK:  Daines.

Governor — The aforementioned Bullock is term limited.  The race to succeed him is between Rep. Greg Gianforte (R) and Lt. Gov. Mike Cooney (D).  PICK:  Gianforte.

President (5) — Like Maine, Nebraska gives individual electoral votes to the candidate who carries each congressional district.  While Obama won the 2nd CD in 2008 (and thus one electoral vote), Republicans carried the entire state in both 2016 and 2020.  PICK:  Trump wins 4 out of 5 EVs, with Biden getting one.

Senate — The Democrats had trouble coming up with a candidate to oppose GOP Sen. Ben Sasse.  Chris Janicek won the Dem primary, but the party withdrew its support after it was learned Janicek sexually harassed a campaign worker.  He refused to quit the race, and now the party establishment is backing a write-in effort by Preston Love.  PICK:  Sasse.

President (6) — Nevada had a long history of voting Republican for president, but that ended with two Bill Clinton victories as well as the last three elections.  PICK:  Biden.

President (4) — Democrats have won four in a row and six out of the last seven, but Hillary Clinton’s margin over Trump in 2016 was airtight.  PICK:  Biden.

Senate — Sen. Cory Booker (D), fresh off his failed presidential bid, is being challenged by Rik Mehta (R).  No Republican has won a Senate race here since 1972.  PICK:  Booker.

President (15) — Only twice has the state gone Democratic since LBJ’s landslide in 1964:  Jimmy Carter in ’76 and Barack Obama in ’08.  But the last several contests have been very close.  PICK:  Tossup.

Senate — Sen. Thom Tillis (R) has had difficulty trying to balance between loyalty to Trump and appealing to independents.  Cal Cunningham, who lost the Dem primary for the Senate ten years ago, has been hit by a sex scandal.  PICK:  Cunningham (D gain).

President (18) — Everyone knows that no Republican has ever been elected without carrying Ohio.  And the state has gone with the winner for well over a century, other than 1960, when Nixon carried the state over Kennedy, and 1944, when FDR won but Ohio voted GOP because Gov. John Bricker was on the ticket.  PICK:  Trump.

President (20) — Trump broke the Democrats’ winning streak at six with his victory in 2016.  PICK:  Tossup.

President (38) — The word has long been that demographic changes are improving Democratic chances in a state the GOP has won ten times in a row.  PICK:  Trump.

Senate — Sen. John Cornyn (R) is being challenged by M.J. Hegar, who came close to upsetting a GOP House incumbent in 2018.  PICK:  Cornyn.

President (13) — Once a red state turning purple, the commonwealth is now more blue than anything else.  PICK:  Biden.

Senate — Sen. Mark Warner (D), who was nearly shocked out of his seat six years ago, is being challenged by Daniel Gade (R).  PICK:  Warner.

Senate — Sen. Shelley Moore Capito (R) is being challenged by Paula Jean Swearengin (D), who made a bid for the Senate in 2018.  PICK:  Capito.

Governor — Gov. Jim Justice, elected as a Democrat in 2016 but who switched to the GOP shortly after, is being challenged by Ben Salango (D).  Pick:  Justice.

President (10) — Trump’s victory in 2016 ended the Democrats’ winning streak at 7.  The state has been especially hard hit by the latest round of Covid.  PICK:  Biden.

Joe Biden wins the presidency with a minimum of 271 electoral votes.  President Trump has 197 electoral votes.  Even if he wins any or all of the four tossup states and their 70 EVs, it would still not be enough to give him re-election.

Democrats lose one Senate seat (Alabama) but pick up four (Maine, North Carolina, Arizona and Colorado).  That would make it a 50-50 Senate, with the Democrats in the majority ONLY if Biden wins.  Of course, there are other states currently close enough that they could switch.

Democrats are all but assured of keeping control of the House and may even add to their majority.  But we did not do a district-by-district analysis. 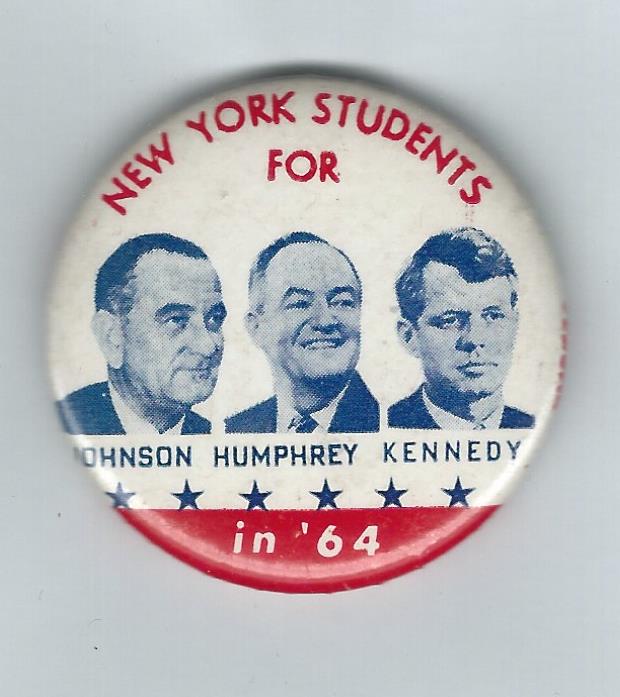 This day in campaign history:  President Lyndon Johnson wins a smashing victory over Sen. Barry Goldwater (R), who was limited to just five states in the Deep South and his home state of Arizona.  LBJ’s 61% of the vote breaks all records.  Democrats have a net pickup of 38 seats in the House, and among their new Senate winners is Robert Kennedy, brother of the late president, in New York (Nov. 3, 1964).