With most attention this year squarely on which party will control the Senate, it is understandable that the 36 states holding gubernatorial elections are taking a back seat.  But between the recent “fangate” flap in Florida and the presidential hopes of Wisconsin’s Scott Walker — not to mention that two of the last three presidents came from the ranks of governors — it seems clear that much of the excitement on Nov. 4th will be found in the three dozen battles for chief executive.

Once, and this goes back a ways, the focus of midterm elections was on the gubernatorial contests in states like California or New York.  But the Republican Parties in those respective states have, at least for the present, faded into the background.  Neither contest is considered competitive.

But there are so many great stories out there.  In addition to the aforementioned Florida (Rick Scott vs. Charlie Crist) and Wisconsin (Scott Walker vs. Mary Burke), we’re watching to see if the demographics in Georgia have changed enough to return the Democrats and Jason Carter to power … if the dismal financial picture in President Obama’s home state of Illinois will lead to the election of Bruce Rauner, a Republican … if the national attention given to Wendy Davis in Texas or John Kitzhaber’s fiancee in Oregon will make a difference in those respective states.

With less than two weeks to go, there is still time for some late-breaking news to alter the landscape.  But for now at least, this is how I see this year’s 36 gubernatorial contests.

Senate races.  Check out the Oct. 20 column for my latest ratings.

Midterm Election Special.  Is your radio station carrying the special one-hour pre-election broadcast of the Political Junkie?  It’s not too late to get them to pick it up!

And a week later … I’ll be live with host Laura Knoy all night long on Nov. 4 for New Hampshire Public Radio’s special election coverage.  I know there are many choices available that evening but I hope you’ll check out NHPR’s coverage.  It’s guaranteed to be lively, engaging, informative and fun.  Click here for more details.

Q:  I can’t wait for the presidential election campaign to start.  Who do you think will be the Democratic and Republican nominees in 2016? — Kent Coe, La Grande, Ore.

A:  It’s hard to make the case that the Democrats will nominate anyone other than Hillary Clinton.  There does seem to be some amount of grumbling from the left about her, about her desire that President Obama had a more “assertive” foreign policy, about her close ties to Wall Street.  But who’s going to take her on?  It’s pretty remarkable that most if not all observers have dismissed the chances of Vice President Joe Biden; in fact, the conventional wisdom is that, given Clinton’s standing in the polls, he won’t even run.  Since when was the ascension of a willing/sitting V.P. to succeed his boss ever been questioned?  You’d have to go back to Alben Barkley in 1952 to find a veep who tried to but failed to get the nomination.  Massachusetts Sen. Elizabeth Warren tops the progressive wish list, but she insists she won’t run.  Still, the more invitations she gets to campaign for fellow Democrats, the more we hear about “if only” with regard to a candidacy.  Don’t forget, people have said in the past that they won’t run only to change their mind later.  So we’ll see.  As for other alternatives to Clinton, it’s hard to see Maryland Gov. Martin O’Malley, former Sen. Jim Webb of Virginia or ex-Montana Gov. Brian Schweitzer going anywhere; maybe some are auditioning for 2020.  As for Bernie Sanders, I reckon the senator from Vermont would have to become a Democrat before he decides he wants the Democratic nomination.

On the Republican side it’s far less clear.  People like Ted Cruz (and Ben Carson!) do really well in straw polls, but I’ve never put much faith in those things.  (If straw polls really mattered, Ron Paul would have been the nominee in 2012.)  The “establishment” keeps talking about Jeb Bush, but (1) I’m not convinced he runs, and (2) he still has a long way to go to convince tea party folks he’d be an acceptable nominee, given his views on Common Core education standards and immigration overhaul.  Marco Rubio’s stock has improved from a year ago, when he was getting pilloried by the right for his efforts on immigration, so he’s somebody to watch.  I question whether Chris Christie can bounce back from New Jersey’s weak economic situation.  I still can’t make up my mind whether his style would charm or turn off Republican voters around the country.  And we still have the 2014 midterms ahead of us, which prospective GOP candidates like Scott Walker and John Kasich are closely watching.  To be continued. 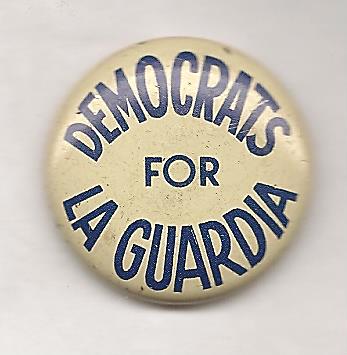 This Day In Political History:  President Franklin Roosevelt, a Democrat, endorses NYC Mayor Fiorello La Guardia, a Republican seeking a third term, calling him the “most honest” and running the “most efficient municipal government of any within my recollection” (Oct. 24, 1941).  La Guardia, who is also running on the American Labor Party ticket, will go on to defeat Democrat William O’Dwyer, the Brooklyn district attorney.  Four years later, O’Dwyer wins the mayoralty as La Guardia retires.