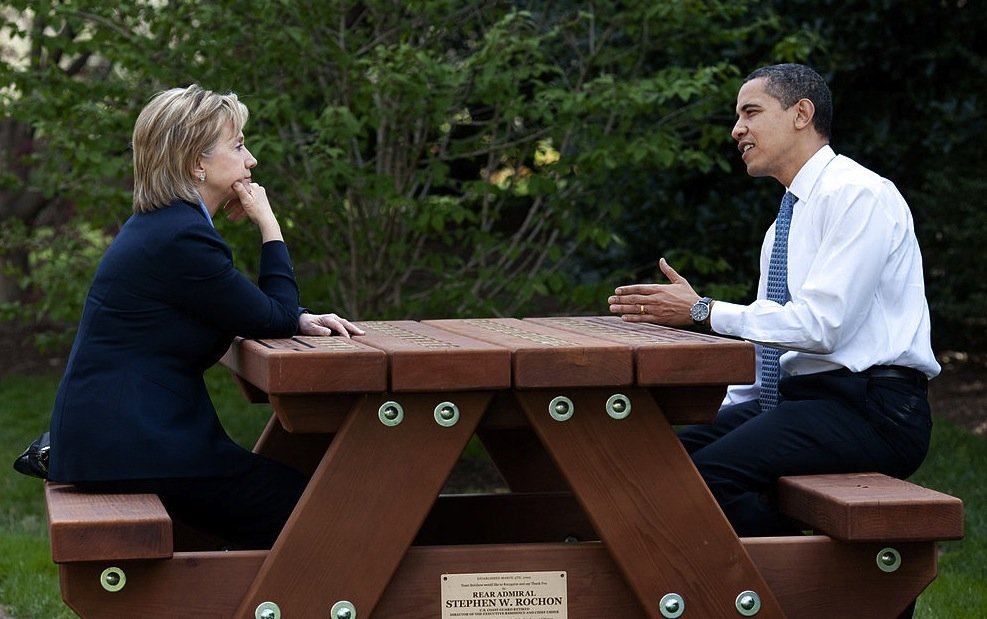 Hillary Clinton is not known as someone who says whatever she’s thinking, certainly not when it has the potential to make headlines … or create waves.  But headline making she did when she seemingly launched a critical assessment of President Obama’s foreign policy in an interview with The Atlantic.  She has since said that no criticism was intended, and in fact the two have already talked it over at a Martha’s Vinyard pow-wow.  But Beth Reinhard of the Wall Street Journal says this is part of the Clinton strategy for 2016, staying loyal as much as possible while realizing that charting an independent course may be the smartest card to play, given Obama’s sinking polling numbers.

But there are, as you probably know, elections coming up before 2016.

So we have Alexandra Gutierrez of Alaska Public Media and Matt Buxton of the Fairbanks Daily News-Miner to talk about next week’s Republican primary in Alaska to see who will be taking on vulnerable first-term Democratic Sen. Mark Begich in November.

And then we leave #49 for #50, as Hawaii Democrats are still finishing the process of choosing a Senate nominee to fill the final two years of the term of the late Daniel Inouye.  The primary was last Saturday, but (1) the race was too close to call, and (2) not everyone voted, as a tropical storm wrecked havoc on the Big Island.  We should know the winner by Friday, reports Hawaii Public Radio’s Molly Solomon, the day where some residents unable to vote last week will have their own “special election.” Molly also talks about the race that wasn’t close:  the Democratic primary for governor, where the incumbent, Neil Abercrombie, got clobbered in his bid for a second term.

And we may not have seen the last of incumbent governors going down to defeat this year.  Reid Wilson of the Washington Post takes a look at all the vulnerable govs up for another term in November.

And finally, our “this week in political history” feature goes back 34 years this week, when Democrats met in New York’s Madison Square Garden to settle the feud between President Jimmy Carter and his intra-party challenger, Massachusetts Sen. Edward Kennedy.  Professor Julian Zelizer of Princeton University, a Carter biographer, talks about how the divisions at the convention never went away and were a factor in Carter’s loss that fall to Ronald Reagan.

And with station WXXI of Rochester, N.Y. picking up the full hour of the Political Junkie program, we of course included a Rochester-related trivia question.