There’s a devastating scene in Michael Moore’s 2004 documentary film, Fahrenheit 9/11, in which President George W. Bush, on vacation in Kennebunkport, is telling reporters that “we must stop the terror” and “I call upon all nations to do everything they can to stop these terrorist killers” … and then seconds later he adds, “Now watch this drive,” and he whacks the golf ball somewhere.  Here it is, courtesy of YouTube:

Moore used it in the movie to show a tone-deaf, indifferent Bush, giving lip service to a serious issue — in this case, a rash of suicide bombings in Israel.

No two incidents in history are ever exactly alike.  But there was an eerie similarity last week when President Obama issued a tough statement on the beheading of American journalist James Foley by Islamic extremists … and then proceeded to the golf course with his pals during his vacation on Martha’s Vineyard. 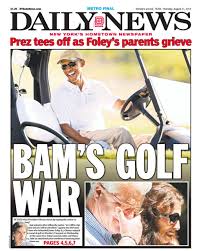 It sparked outrage across the country, everything from caustic comments from TV pundits to late-night comedians to, of course, the inevitable tabloid front pages, such as this one from the New York Daily News.  And the criticism wasn’t only coming from the right.

Jim Manley, a former top aide to Senate Majority Leader Harry Reid, was quoted in a New York Times piece saying that the video of Foley being beheaded “was just so shocking that the idea that he [Obama] was going to immediately run to the golf course was just a little too much for folks; it was tone-deaf. … I think a lot of Democrats flinched a little bit.”  Ezra Klein, the editor-in-chief of the online news site Vox and a leading liberal, wrote on Twitter that “golfing today is in bad taste.”

And Rick Ungar, normally a pro-Obama columnist for Forbes, wrote that the president’s decision to play golf “revealed a complete lack of class on Mr. Obama’s part”:

While reasonable people can disagree as to the relative benefits or detriments of this President’s tendency to thumb his nose at optics and deal with the reality of his own circumstances—after all, we should all be able to agree that every tool of the presidency travels with Mr. Obama 24/7—what yesterday’s decision to hit the links revealed to me was that our president is, sadly, capable of showing a stunning inability to grasp the nation’s collective pain and respond accordingly. … Had it been me, I would have recognized that there was somewhere else I should be that would be a far better use of my time…at the side of Diane and John Foley, the parents of the tragically deceased James Foley. …

I’m sorry, Mr. President, but your behavior yesterday was not about thumbing your nose at or simply ignoring those who refuse to acknowledge that you have a right to a vacation and to some time playing a game that relaxes you. It was also not about those who refuse to appreciate that you can do your job anywhere on the planet with the same effectiveness as sitting behind your desk at the White House.  It was, instead, about revealing a side of yourself that Americans, of all political stripes, cannot help but be troubled by—a coldness that revealed a complete lack of understanding of the classy thing to do at a difficult moment.

This has nothing to do with the argument that “presidents deserve vacations.”  Of course they do.  And of course the president is accompanied on vacation by top aides and is constantly briefed.  The argument, pushed by Republicans, that Obama is ALWAYS on vacation (similar to what Democrats said about both Bushes), is ridiculous and not the issue here at all.   Just as the image of Bush 43 taking a swing at a golf ball immediately after denouncing terrorism felt insensitive, the picture of Obama smiling in a golf cart minutes after denouncing Foley’s murder was a p.r. disaster.  In the above-referenced New York Times article, Peter Baker and Julie Hirschfeld Davis write that Obama “long ago stopped worrying about what critics say, according to aides, and after the outcry over Wednesday’s game, he defied the critics by golfing again on Thursday, his eighth outing in 11 days on the island.”  But, they note:

The juxtaposition of his indignant denunciation of terrorists and his outing on the greens this week underscored the unintended consequences of [being known more for cool, emotional detachment].  If Mr. Obama hoped to show America’s enemies that they cannot hijack his schedule, he also showed many of his friends in America that he disdains the politics of appearance.

And it’s not just this incident, as the Washington Post’s Zachary Goldfarb points out:

He drank beer and played billiards with the governor of Colorado while dismissing calls to visit children detained at the border. He enjoyed a golfing weekend in California as the Iraqi city of Mosul fell to the terrorist group known as the Islamic State. He opted to continue with a previously planned vacation in Key West, Fla., as Russia annexed Crimea.

President Obama may have complete disdain for this kind of interpretation.  Maybe he’ll never be the kind of politician who can show empathy the way Ronald Reagan or Bill Clinton could.  But, in Washington, perception is reality.  And if the president comes off tone deaf in situations like this, it’s not because of those meanie Republicans and Fox News.

On the road.  A wonderful series of events in Aspen, Colo., earlier this month, sponsored by the folks at Aspen Public Radio, where we got to meet new friends and re-meet old ones.  And, for the record, we picked up some nice Colorado campaign buttons for the famed collection.

And there are many more events to come, including one in Lebanon, N.H. (courtesy New Hampshire Public Radio) on Sept. 3, and a Political Junkie Roadshow (with Neal Conan) in Rochester, N.Y. (courtesy radio station WXXI) on Sept. 28.  Click on the links for more details.

Obits.  Some of the more notable people who left us in recent days include former Vermont Sen. Jim Jeffords, whose decision to leave the GOP and become an independent in 2001 shifted

Senate control to the Democrats, at 80 on Aug. 18 (see last week’s Political Junkie podcast); Fernand St. Germain (D-Rhode Island), the former chairman of the House Banking Committee, at 86 on Aug. 16; former Rep. George Hansen (R-Idaho), who served seven non-consecutive terms in Congress and who twice ran for the Senate, at 83 on Aug. 14; leftwing journalist Robert Sherrill, at 89 on Aug. 19; and Sophie Masloff, the first female mayor of Pittsburgh, at 96 on Aug. 17.

More stuff.  There is a Political Junkie page on Facebook, which you should regularly check out.  And you can now listen to our podcast on iTunes!  Click here to subscribe!

And Speaking of Buttons.  Please don’t forget the DONATE button on our Home Page.  All this stuff — the Political Junkie column and web posts, ScuttleButton puzzles, and especially the weekly podcast, can’t survive without your financial contributions.  We appreciate your generosity more than you know.  Thank you! 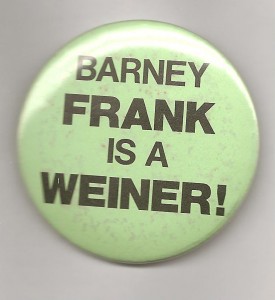 This Day In Political History:  In response to a barrage of reports from the Washington Times, Rep. Barney Frank (D-Mass.) holds a news conference to acknowledge he paid a male prostitute for sex beginning in 1985 and then made him a household employee.  But Frank, who is openly gay, denies that he knew the man, Steven Gobie, was running a prostitution service from the congressman’s home.  And he rejects demands that he resign his seat, insisting he will seek re-election in 1990 (Aug. 25, 1989).  Batting away a GOP attempt to have him censured, the House on July 26, 1990 votes 408-18 to reprimand Frank.