In nearly every obituary for Basil Paterson, the longtime Harlem political powerbroker who died at age 87 last week — and usually in the first sentence — it said he was the father of former Gov. David Paterson.  While that is true, it doesn’t begin to describe the role he played in establishing and nurturing African-American politics in New York City in the past half century.

New York elected its first black member of Congress in 1944.  That year, the victory of Harlem Democrat Adam Clayton Powell Jr. doubled the black representation in the House to two.  Both Powell and the other African-American lawmaker in Congress at the time, William Dawson of Illinois, became key fighters on behalf of black political power.  But both of them, in their later years, let down their strongest supporters.  Dawson, to keep his influence, became a soldier on behalf of the Richard J. Daley machine in Chicago.  Powell often loved to show his independence — he backed, for example, President Eisenhower over Adlai Stevenson in 1956.  And accusations of financial and personal misconduct, in addition to long stretches of absenteeism, made voters weary and ready for change; he was defeated for renomination in the 1970 primary by Charles Rangel.

As it turned out, Powell’s decline was part of the rise of real black political power in New York City.  Along with Rangel, who served in the state Assembly for four years prior to taking on Powell, Percy Sutton, David Dinkins and Basil Paterson formed an increasingly influential and dominating political machine in Harlem.  They were true kingmakers whose influence was felt beyond Harlem and Manhattan.  They encouraged and mentored a growing number of African-American politicians in the city, the state and the nation.  Here’s a quick look at what was called the “Gang of Four”:

Sutton, the attorney for Malcolm X, was elected Manhattan Borough President in 1965, serving until 1977, when he decided on a bid for mayor — the first prominent African-American politician to attempt that.

Dinkins made it to the promised land of Gracie Mansion.  The City Clerk of NYC for ten years, he was elected borough president in 1985 (on his third try) and four years later became mayor, first ousting Mayor Ed Koch in the Democratic primary and then eking by Rudy Giuliani (R) in November.

And while Paterson may have been the most important of all of them, higher office eluded him.  He became involved in Democratic politics in the 1950s and was instrumental in getting Sutton, Dinkins and Rangel elected to their respective positions.  Paterson himself won election to the state Senate in 1965 and served until 1970, when he won the primary for lieutenant governor (against future Long Island congressman Jerome Ambro).  But the Democratic ticket of Arthur Goldberg and Paterson lost to incumbent Republicans Nelson Rockefeller and Malcolm Wilson.

He also served as New York’s secretary of state, an appointed position, during Gov. Hugh Carey’s first term.  He himself considered a run against Koch in 1985; another black candidate, Manhattan Democratic leader Denny Farrell, ran that year but got clobbered.

Basil’s son David also served in the state Senate, winning the same seat his father held 40 years earlier.  In 2006, Democratic gubernatorial nominee Eliot Spitzer picked him as his running mate, and that November Spitzer’s landslide victory made Paterson the state’s first black lt. gov.  (In New York, gov. & LG candidates run together as a team in the general election.)  Paterson was only in that position for 14 months when Spitzer, embroiled in a prostitution scandal, resigned as governor and Paterson moved up.  But his tenure as gov. was filled with gaffes and missteps, and he decided not to seek a full term in 2010.  The state’s first and only black lt. gov. and gov., David made history.  But nobody confused him with his much more talented and savvy father.

New York politics has changed in recent years, and not in a way that the Gang of Four would have liked.  Mayor Dinkins was defeated after just one term and was followed by eight years of Giuliani and 12 of Michael Bloomberg.  Another white candidate, Bill de Blasio, was elected in 2013.

Gov. David Paterson had no chance of retaining the governorship in 2010; it’s a job that Andrew Cuomo, a white Democrat who won that year and who is up in 2014, looks like he can keep for as long as he likes.

And Congressman Rangel, still in office 44 years after ousting Adam Clayton Powell, is facing stiff opposition in this year’s primary.  In 2010, he was censured by the House over financial and ethical lapses.

But none of these politicians would have risen as high as they did had it not been for the efforts of Basil Paterson.

History.  Had Paterson won his bid for lt. gov. of New York in 1970, he would have become the first African-American to hold that position since Reconstruction.  Black candidates for LG have subsequently had more success.  Here’s the list of black LG’s since Paterson’s bid:

1974:  George Brown and Mervyn Dymally were elected in Colorado and California respectively; because Brown was sworn into office one hour before Dymally, he is considered the nation’s first black lt. gov. since Reconstruction.  Brown was elected independently from gubernatorial candidate and fellow Democrat Dick Lamm.  But after four years, where he exhibited some odd behavior, Lamm dropped him from the ticket.  Dymally was also elected independently from his fellow California Democrat, gov. nominee Jerry Brown, in 1974.  In 1978, as Brown was winning an easy re-election, Dymally was defeated by Republican Mike Curb.  He later served a dozen years in Congress.

1998:  Joe Rogers (R) elected in Colorado.  Rogers was elected separately from his fellow Republican, gov. candidate Bill Owens.  He was the first black Republican elected to the post in the nation.  The two sparred during the four-year term and in 2002, when the law was changed calling for gov. and lt. gov. candidates to be elected as a team, Owens dropped Rogers from the ticket.

2002:  Jennette Bradley, a Republican member of the city council from Columbus, became the first black woman elected lt. gov., winning on the ticket led by incumbent Ohio GOP Gov. Bob Taft.  The same year, another black Republican, Michael Steele of Maryland, was elected LG on the ticket led by Bob Ehrlich.  Bradley served until 2005, when she resigned to become state treasurer.  Steele was the GOP nominee for the Senate in 2006, when he lost to Ben Cardin.

2006:  Anthony Brown was elected on the Maryland Democratic ticket led by Martin O’Malley.  After eight years in office, he is running for governor this year.  The aforementioned David Paterson of New York was also elected LG that year, on the ticket led by Eliot Spitzer.

2012:  Jennifer Carroll was elected on the Florida Republican ticket led by Rick Scott.  She resigned in March of 2013, accused of being part of an illegal gambling operation. 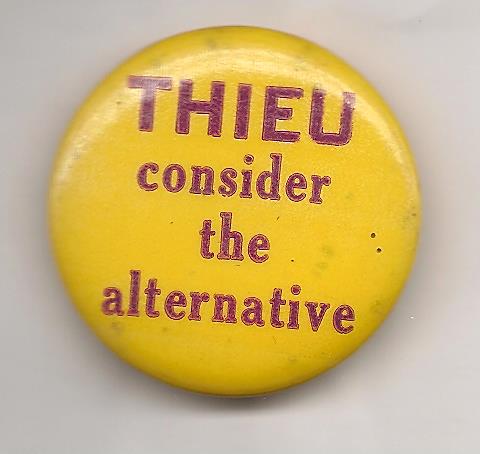 This Day In Political History:  An angry South Vietnam President Nguyen Van Thieu resigns his office, blasting the U.S. for allegedly failing to keep its promises to stand by the Saigon government.   “The United States has not respected its promises.  It is unfair.  It is inhumane.  It is not trustworthy.  It is irresponsible.”  U.S. President Gerald Ford acknowledges that some promises were made by President Nixon in 1972-73.  “Unfortunately, the Congress in August 1973 … took away from the president the power to move in a military way to enforce the Vietnam peace agreement” (April 21, 1975).  South Vietnam will soon fall to the Vietcong and North Vietnamese forces.