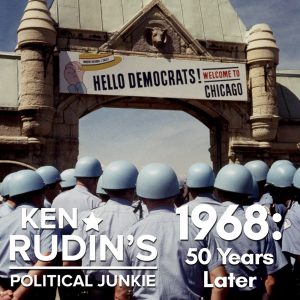 The year 1968 will long be remembered for its political and social upheaval. As Americans reeled from the assassinations of two prominent leaders and sentiment deepened against the Vietnam War, politicians from both parties struggled to respond to aggravated constituents and build consensus.

Join Ken Rudin for 1968: 50 Years Later, a special three-part series looking back on the dramatic political events of 1968. Ken speaks with journalists, historians, and several key figures of the time to reflect on how it all affected the two major parties and the country, and explore how those events continue to shape politics today.

After a disappointing result in the New Hampshire Primary, President Lyndon B. Johnson drops his bid for re-election. The Gene McCarthy campaign is furious as Bobby Kennedy enters the race. On the Republican side, Richard Nixon launches a political comeback. The nation reels after the tragic assassination of Martin Luther King, Jr. in Memphis. And the assassination of RFK on the night of the California primary sends the Democratic Party into a tailspin.
More info »

The Democratic National Convention gets underway in Chicago, but there is turmoil both inside the hall and outside. Anti-Vietnam War demonstrators and police clash violently in the streets. The Chicago Eight are charged with conspiracy and incitement to riot. Meanwhile, inside the hall, floor fights between establishment and anti-war delegates threaten to tear the party apart. Vice President Hubert Humphrey secures the nomination despite having not competed in any primaries.
More info »

Part 3: The Voters Have Their Say

Richard Nixon stages a political comeback. Segregationist Gov. George Wallace mounts an independent presidential bid. And a conflicted Hubert Humphrey breaks from LBJ and gives a televised speech opposing the bombing in North Vietnam. Days before the election, President Johnson stops the bombing in an effort to boost peace talks. Nixon holds on to narrowly win the election.
More info »